John Silvanus Wilson Jr. returns to his alma mater, where he is currently a president-in-residence, to deliver the convocation address.
By Casey Bayer
April 19, 2018 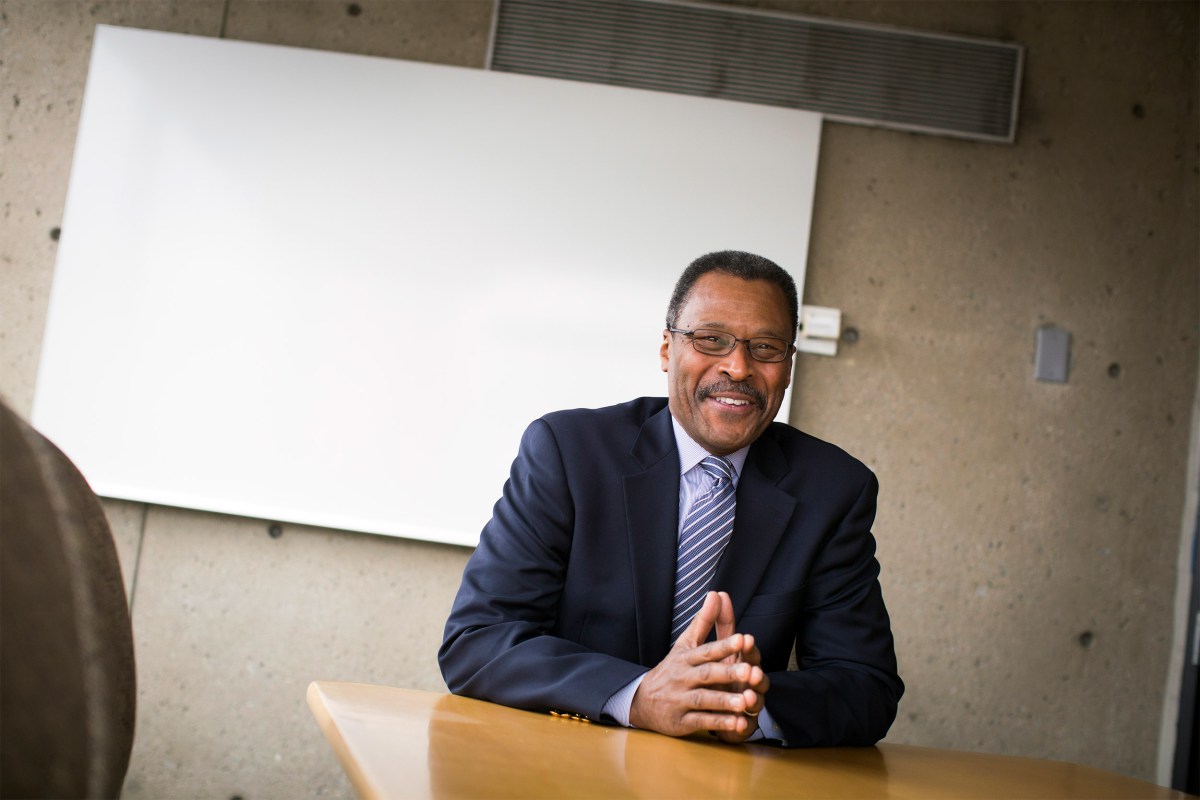 Harvard Graduate School of Education Dean James E. Ryan is pleased to announce that John Silvanus Wilson Jr., Ed.M.’82, Ed.D.’85, senior adviser and strategist to the president at Harvard University, will address the graduating class and their families at convocation on May 23, 2018.

“Throughout his expansive career, and with unrivaled dedication to his alma maters, John has been working faithfully to ensure that colleges and universities reach their full potential as sites of personal transformation and social progress,” said Ryan. “This year, we had the great fortune of hosting John as a president-in-residence and we’re delighted for our graduates to hear from a remarkable HGSE alumnus and visionary leader. We’re deeply indebted to the HGSE Speakers Committee, which consists of students, faculty and staff, and is chaired by [Professor] Paul Reville, for recommending John to be this year's convocation speaker.”

Wilson, the former president of Morehouse College, has also served as a member of the Board of Overseers, the former head of the White House Initiative on Historically Black Colleges and Universities under President Obama, and as a former senior administrator at the Massachusetts Institute of Technology.

“When Dean Ryan reached out to me to officially extend the invitation, he let me know that a committee of students, faculty, and staff jointly made the decision. I know this may sound or seem like a standard thing to say, but I truly regard it as an honor and a privilege to have been selected,” said Wilson. “I know they could have chosen any number of educators or brand-name people from around the country or world. That they chose me feels quite special and when it’s all said and done, I want the graduates to feel that their trust in me was well-placed!”

After leaving Morehouse College last March, Wilson returned to HGSE’s campus to begin work on a book on the future of higher education, with an emphasis on black colleges, and became immersed in the community once again, working with doctoral students and developing relationships with faculty and staff as well.

“HGSE is still a place where people come to imagine and plan better ways to realize powerful educational outcomes. I felt that way about this special community when I was here in 1985, and I still see and sense those virtues 32 years later,” Wilson said. “Beside the impressive professionalism of the staff, there remains among the students and faculty a deep understanding of the full range of educational challenges facing our nation. There is also a palpable determination to come up with new ways to fix what’s broken. I have met people here who are grappling with and trying to solve some of the most intractable problems in education.  I just love the energetic, creative, and innovative spirit that is evident in people on that kind of journey.”

From his time as a student, Wilson’s work and advocacy has focused on black colleges and minority-serving institutions. And in President Barack Obama’s administration, Wilson collaborated with the Department of Education to support and strengthen those institutions. Now seeing them as ripe for a surge in relevance, strength, and visibility, Wilson returned to HGSE as president-in-residence with the hope of encouraging the community to be as reflective of the ideals that drove him when he was a student.

“On my own journey through the past academic year to this 2018 commencement season, I have thought many times about the enormous volatility of the world our graduates will enter. The instability of it all reminded me of how much I miss an ethic instilled in those of us who were fortunate enough to work for President Obama,” said Wilson. “It was clear to everyone on the team that if you brought ‘drama’ by somehow being a source of more noise than signal, you could easily shorten your tenure in the administration.  He was known as ‘no drama Obama!’  I miss that. And there is a sense in which my greatest hope is that this class will be determined to increase our nation’s signal to noise ratio.”

“There are important conversations we simply are not having because there is just way too much noise in this country. Even in the wake of the Stoneman Douglas High School tragedy, we appear to be unable to cut through the noise and confusion and reach an accord around something as basic as school safety. So, among my highest hopes for this class is that they will help us all to reduce the negative national noise and amplify the positive national signal. Especially regarding the broad quest for a quality education, we need to ensure that the signal of what binds and strengthens us is louder than the noise of what separates and weakens us. I would like to think that HGSE-educated folks can excel in helping us all to get that right.”

Note: Due to capacity constraints, the event is restricted to HGSE faculty, students, staff, alumni, and guests of our 2018 graduates.