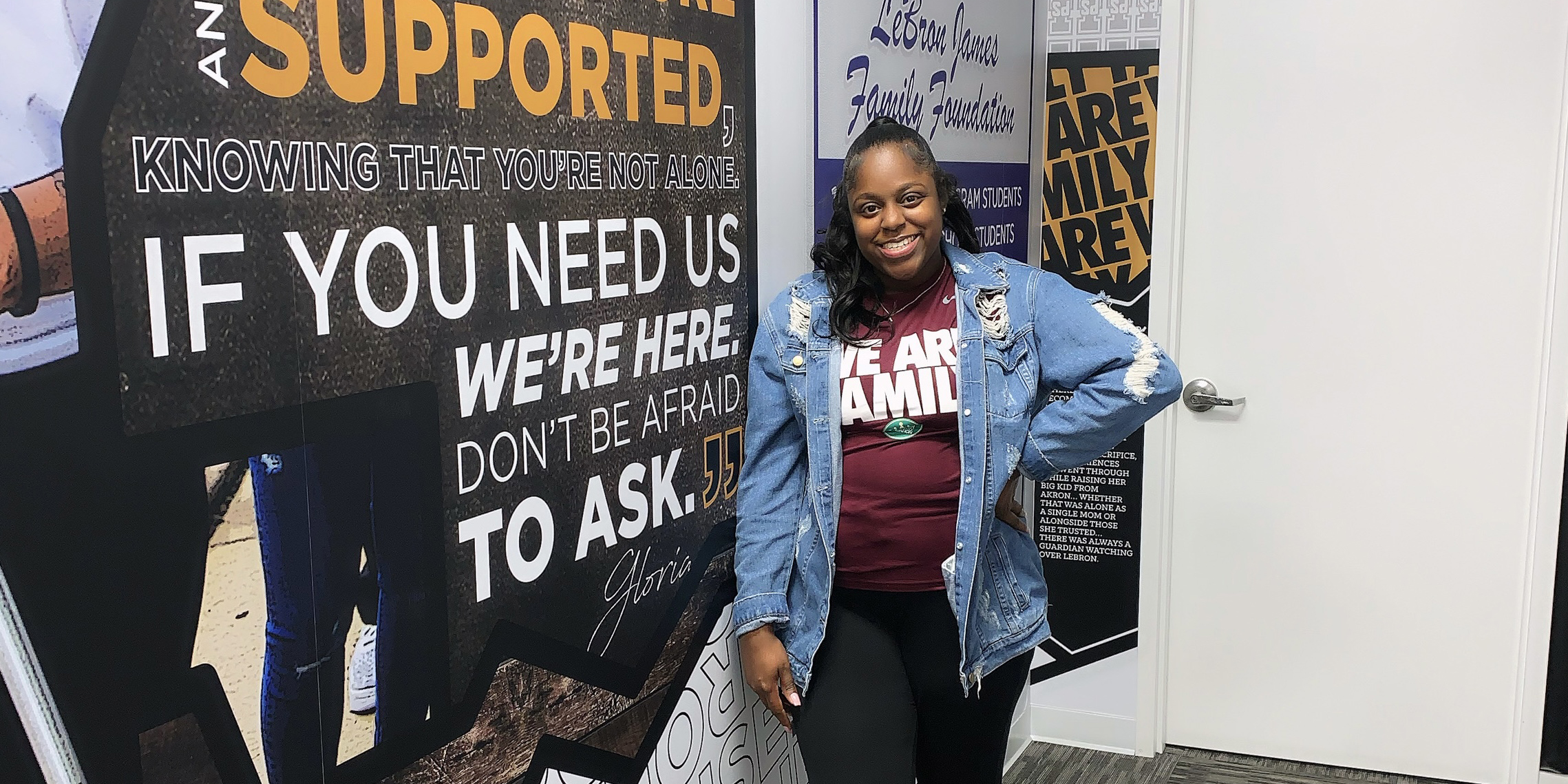 During the filming of a video that Ayesha Cotton, Ed.M.’21, thought was just about the I Promise School where she works, a small group of students and staff quietly walk in behind her carrying a giant light blue and yellow check. They call out her name, and with cameras still rolling, Cotton turns to the group and seems confused.

“What is that?” she says. It doesn’t click that the $50,000 check, from Box Tops For Education and the LeBron James Family Foundation, is made out to her, not to one of the school’s families. When the group explains that the money is to help her pay back student loans from her recent year getting her master’s at the Ed School, Cotton bursts into tears, sending the rest of the room into tears, too. There are hugs, and a staff member rubbing her back says, “You take care of everybody else.”

And she does — although it’s not what someone might expect from a staff lawyer. But this is I Promise, a public school in Akron, Ohio, started by the NBA star’s foundation, where the motto is “We are family.” It’s a motto that Cotton says she takes seriously.

“I always knew I would work helping people and my community, and I have a passion for education and the school-to-prison pipeline,” she says. It’s why, after law school in 2019, she joined the school as an I Promise attorney fellow, and then jumped at the chance to stay on fulltime as a staff attorney. Her main duties are to work with students and families through the school’s in-house Family Resource Center on non-criminal legal matters — everything from housing evictions to custody settlements to consumer debt to just understanding legal terms. But Cotton realized early on that the students and families she worked with needed to feel comfortable with her before feeling comfortable sharing their legal dilemmas. So on any given day, you won’t find her holed up in her office, which is located in the school. “Sometimes I’m doing recess duty or I’m in the halls during class change,” she says. She helps out at afterschool events and family dinners, and kids often take “brain breaks” in her office. Recently, she was asked to start a debate team. “They really want us embedded in the school and with the students,” she says. “We’re never going to get kids to where they need to be if we don’t look at them in a holistic matter. If they’re going to get evicted, they’re not going to focus on school.”

For Cotton, this work isn’t theoretical — it also hits home personally. She grew up two hours away, in Columbus, with parents who struggled, including a father in prison battling addiction.

“I remember our electricity being cut off and what I felt like when the teacher said I wasn’t focused,” she says. “When that kind of thing happens, you’re not focused.”

Asked if she shares her past struggles with students, Cotton says she does, especially when they make assumptions about how she grew up because she’s now a successful professional. “Kids see me and say, but you’re an attorney. You have three degrees,” she says. “They didn’t know my mom was struggling as a single parent and involved in domestic violence or that I used to eat bouillon cubes with bacon bits when we didn’t have food. I sometimes did homework by candlelight. I hated who I was. I acted out. I had teachers who said I would never do anything with my life. That’s what drives me. I tell the kids, I understand you and how all of this impacts your cognitive abilities. I understand those factors.”

While she understands what many of her students are going through, Cotton also felt she didn’t fully understand the “full scope” of what was going on in the education world. It’s why she came to the Ed School last year, when the program was fully virtual, allowing her to continue working at I Promise.

“I had a great education and a law degree, but it wasn’t until my first year working at the school when I thought, you have no right walking into a room of legislators or policymakers and telling them how they need to change schools,” she says. “I can’t go into this room with all guns blazing without a solution. I wanted to know, what solutions are needed? What isn’t working? I wanted to come from a place of deeper understanding. I never want to advocate for something that will harm the students. I respect that enough to educate myself.”

And it’s paid off. Not only does she have a new group of classmates she can lean on — “a new network of beautiful, humble, educated people,” she says, but her hard work is being recognized. As I Promise founder LeBron James says of Cotton in the school video that was being made, “She’s a superhero.” Cotton laughs and says her mom has sent her a link to the finished video, and the NBA star’s comment, at least three or four times already. “He said it again, he said you’re a superhero!” her mom tells her. For Cotton, the comments, and the check she received, plus positive feedback from her students and families, are just validation that the path she is taking is the right one.

“For someone to say, we care about your work, means everything,” she says. “It also lets me know that some of the work being done behind the scenes at schools really does matter. I worked on a custody change recently and to have teachers say the student is now happy and she wants to be here is an amazing feeling.”

It’s one she hopes to pass on.

“My first day at I Promise, some kids came up to me and said, ‘You don’t look like an attorney,’” she says. “I said, ‘What does an attorney look like?’ They paused and said, ‘I don’t know. Well, I guess, you.’ Me being here, this exposes them to the reach of education.”

Watch the I Promise video and hear more from Cotton about her work.