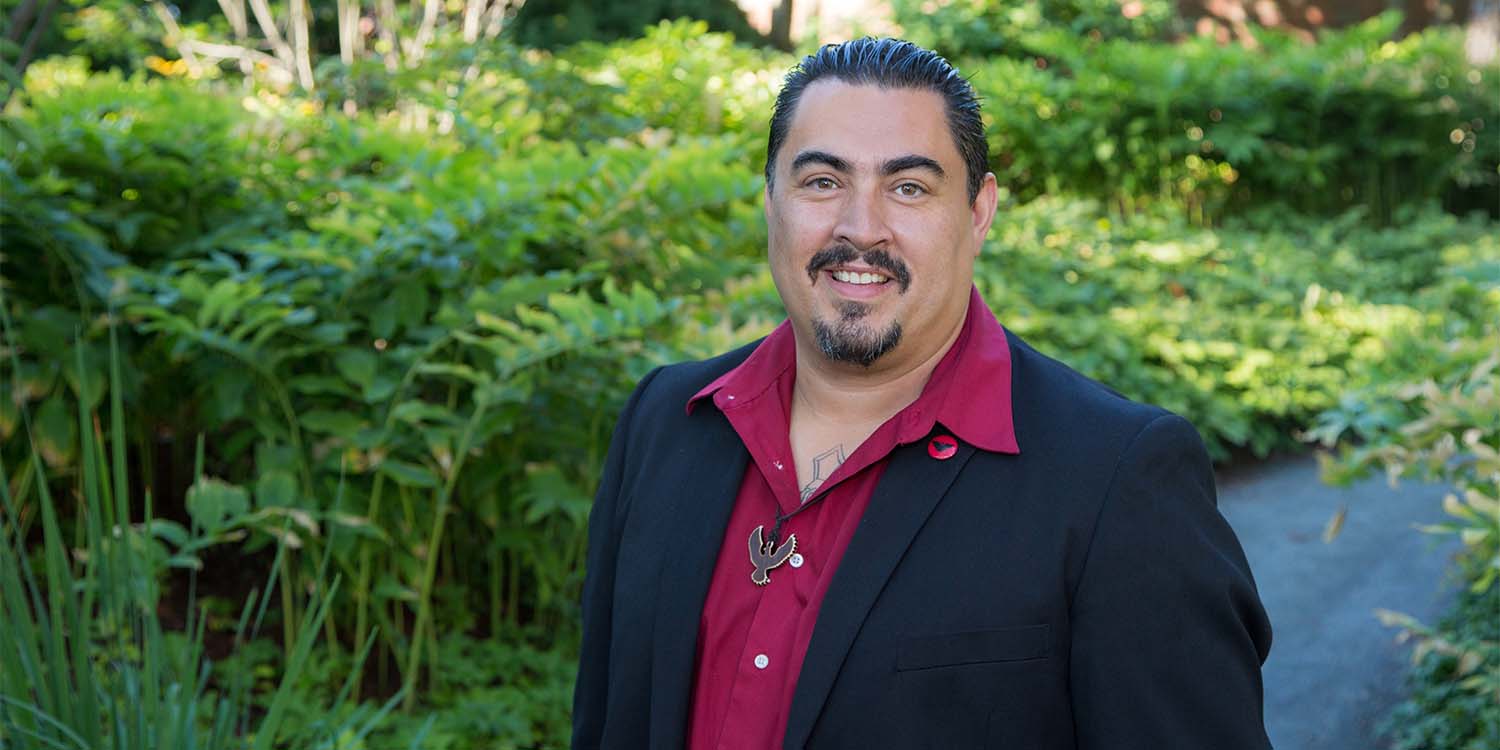 It’s no surprise that when asked why he said yes to being the keynote speaker at this year’s annual Alumni of Color Conference, Cesar Cruz, Ed.L.D.’16, mentions a word that’s in the conference’s title, a word that guides pretty much everything he does: community.

Community is why Cruz went on a hunger strike to protest inadequate funding for California schools. It’s why he co-founded Homies Empowerment, a grassroots organization in East Oakland that started as an afterschool program for young people connected to gangs. It’s why during the pandemic he started a makeshift “grocery store” that allows community members to take what they need, for free, to get through the week. It’s why the back of the shirts they wear at the store say, “It takes a barrio.”

A few days before AOCC was about to kickoff this year online, Cruz talked about community, why self-care isn’t enough, and why his next plan is to open a Homies school.

Why get involved with AOCC this year?
I’ve admired and appreciated the founders of AOCC. AOCC is an important institution at HGSE. When I came as a graduate student in 2013, AOCC was that sacred space where I felt like I was finally home at HGSE. It was an amazing weekend. I’m also committed to this year’s theme, Immunity in Community: Resilience in the Face of a Double Pandemic. It’s this idea that within our community, we have answers related to our other pandemics. We can acknowledge other moments that felt like the end of the world but weren’t.

Tell us about the free store you helped start.
Because we’re in the middle of a pandemic, we launched the FREEdom Store where we decided to redistribute the wealth. When it comes to resources, we asked ourselves, how do we provide food, shoes, toiletries, diapers and shelter? How do we help pay people’s bills?

It’s not just a food pantry, though. You also help pay people’s bills?
Yes. When the stimulus bills were first going around, many of our folks were not eligible — some were undocumented, for example — or the $600 or $1,200 was just a drop in the bucket. We raised $40,000 and thought that would be enough. Boy were we wrong.

It wasn’t enough?
In the first week, we received 1,733 applications for the money. When we did the math, it would be a ridiculous amount per family — $26 per family. So we kept fundraising. We got to $86,550 and were able to help 410 families — the ones with the highest needs. Electricity cut off, someone had COVID, some were losing housing. Now we’re dreaming bigger. I just met with some high school students. I told them to write down the number $3.5 million. Then I told them to divide that by the 3,000 families that are part of the Homies community. Our next goal is to raise that money and give every penny back to the community. We need to be able to help folks survive.

That includes jobs.
We’re trying to help folks secure jobs outside our organization and within. Before the pandemic, we were a staff of 3. Now we’re 31. It’s not self-care that will get us through this. It’s a community of care. You can’t self-care your way out of certain inequities. We’ve realized in our community that my self-care is tied to your self-care. It’s our duty at Homies to work through this.

Part of that hope is your next plan: starting a Homies Empowerment school.
When I left HGSE, I started thinking, how do we create a different kind of education, a different kind of school? It’s still what I’m working on. I wanted to know, can education be different? In some ways, it can, but if we’re not looking at private schooling, if we’re limited by the confines of what the education codes tells us… I’ve had a hard lesson in realizing this, but I’m still having my dream.

Professor Richard Elmore, who recently passed away, helped you with your thinking.
He talked about how the way we’ve been doing school is antiquated, like the post office. He said, let the post office go. I really believed what Richard Elmore was saying. I want to dream about a new kind of school.

What are some of the ways your school will be different?
In Oakland, where I live and where I’m situated, they recently eliminated the Oakland Unified police department. They said kids don’t need to be policed. At Homies Empowerment Schools, security can look like grandmothers. When you have elderly love at the school, it’s that beautiful love that elders can give that we want to give.

Also, many schools are fenced in. Literally chain link fences. They look like prisons. Let’s build our fences out of corn and cacti. You can actually use it to feed the people.

What else are you imagining?
The young kids, the ones who get called thugs and criminals, deviants, they get written off. These are the kids who get suspended or end up in jail. When we ask them who they listen to, they say an uncle or an aunt. When we ask them where those uncles and aunts are, they say, in prison. We want to have one adviser for our students be a lifer. Imagine having someone who is incarcerated who can speak directly to what these kids are dealing with?

Also, at our school, everyone cooks and we all sit down together to eat. The kids, the custodians, the teachers, secretaries — all sitting together and getting to know each other.

A lot is focused these days on project-based learning. We think that’s important, but at our school, we ask, how do we integrate meaningful projects? Kids tell us, for example, that they don’t think anyone can stop prostitution. So we’ll look into human trafficking. We’ll look at a major reality through multiple lenses.

And last, every single young person deserves to know who their heroes/sheroes are. Most schools do not have very good mirrors of students they serve. When young people don’t have mirrors in who is teaching them or in the curriculum or lessons, what does that do to their self-esteem? To their awareness?

What are the next steps for your school?
We want to approach our local Oakland Unified in May or summer of this year with a full proposal. We want to open in the fall of 2022 as a pseudo brick and mortar. One thing that this pandemic taught us is that learning doesn’t have to happen the way it used to. What does it look like online? On Zoom? At different paces? In a brick and mortar some of the time? What can we do at a park? What are other ways to do learning? We’re trying to cook all of these ingredients up and have young people experience education differently.

Learn more about Homies Empowerment and the FREEdom Store.