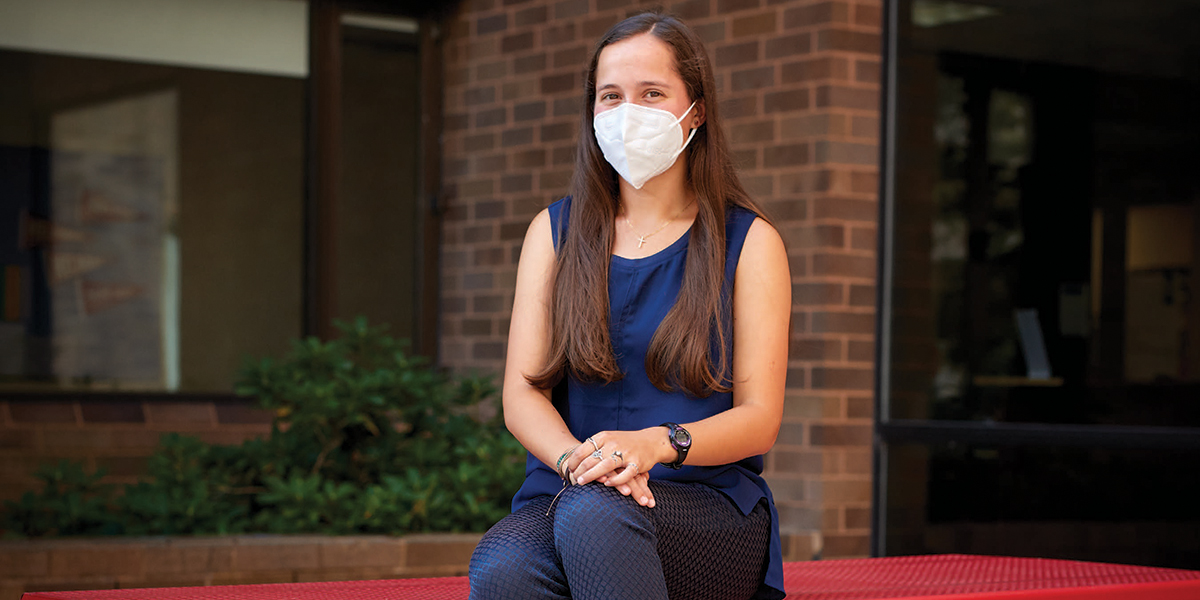 Since March 13, the date that still remains on my classroom blackboard and the date when my ninth-grade English classes finished reading Lord of the Flies, there has been a huge shift in communication with students and their engagement in school. The relationships that I was able to build and foster over the course of the year with students no longer held the sway that they did when we saw each other every day. The struggle to get students to engage with me in any way, not to mention English class material, was consistent and constant. What I had relied upon, my relationships with the student who came into my classroom every day shouting, “Good afternoon, Ms. Loewald,” or the student who sent me English memes every other day, was gone and there was a need to pivot, to change the way I was interacting with students, knowing that the things that they needed from me had drastically changed as well.

I transitioned away from teaching them how to write an essay on Lord of the Flies, knowing that my students really needed me to think of them as whole people instead of only students, and knowing that I (as a person and not just a teacher) also, at the moment, did not want to grade 80 of those essays.

In collaboration with other ninth-grade English teachers, I switched the curriculum and my “ask” for engagement from students. I had students writing, reading, reflecting, and creating memes about their experience with quarantine. I offered students weekly emotional check-ins where the questions remained consistent, but their answers, and the ones who answered, changed from week to week. In an attempt to create more buy-in and model vulnerability, I answered the check-in questions each week and posted silly pictures of myself reading, baking, and gardening.

“The engagement that had been waning over the weeks leading into this project increased drastically when students were gıven agency over their learning.”

Due to all of these changes, I was also able to provide the space and a forum with which to process the social justice protests and movements happening in that moment. I additionally offered weekly video calls where we answered other check-in questions, played games, commiserated together, and discussed different academic concerns. The calls themselves were bittersweet because although there were very few students who joined in, I was able to connect more deeply with the few who did call in precisely because the groups were so small. I also realized that having students read Macbeth, just as having them write their Lord of the Flies essay, was not very likely to encourage students who were already struggling to engage in the work and with me. Instead, I built an independent reading unit where students got to choose from a list of almost 30 texts that were online and then read and discuss (virtually and with each other) what they read. The engagement that had been waning over the weeks leading into this project increased drastically when students were given agency over their learning. Almost every one of my students chose books, found quotes from their texts, and commented on each other’s posts every week for four weeks. I was thoroughly impressed, and my mantra became choice, choice, choice.

And still, even with my desperate attempts at adjusting and changing to meet students’ needs, I found that I did not always know exactly what they needed. I still struggled to keep them engaged and I knew that that was because the routines, expectations, relationships, and jokes that we had all relied on over the past year were gone. There were too many students who I heard almost nothing from. Students who would come into class telling me about their sports teams and how they found a symbol in the reading for homework in February now almost never engaged, even in the nonacademic opportunities that I, sometimes desperately, offered. Individualized emails to them helped occasionally, but not always. At times, the only way to get in touch was by emailing them and including their parents, which I know in some families was an extra stressor in a time of already increased anxiety.

Engagement and meeting students’ needs was my goal over those months and although there were students who I missed and many moments where it did not work, there were also shining bright spots in the midst of that struggle. One of the particularly poignant moments of success was the ability to conference one-on-one with students. There were a few students who really could have benefited from more personalized instruction around their writing over the course of the year. Since I didn’t have 28 students in the room requiring 28 different things from me at the same time, I was granted the space and time to have individual video chats with these students to guide them through the work. I was able to tangibly see students’ confidence and self-advocacy skills grow directly because of those conferences.

Engagement with students will continue to change and adapt in this coming year; I hope that we will have the ability to establish new routines and build new and even stronger relationships so that the engagement that was so lacking and hard to maintain in the spring will be more consistent in the fall. Relationship building while learning remotely is not an easy task, and will be vital to the work that we do as educators to ensure students feel supported, cared for, and engaged as both students and as whole people over the course of the next year and in years to come.

Robin Loewald, after studying Spanish and English language and literacy at Middlebury College, continued to pursue those passions by teaching abroad, getting her master's, and now teaching English.