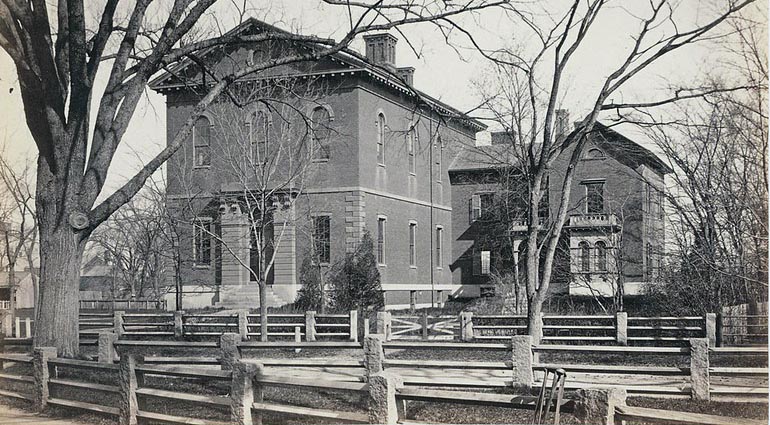 #6: Because We Come from Humble Origins

When we think of the Ed School, we think of Longfellow, Gutman, and Larsen. But Appian Way wasn’t where the school first laid down roots. In 1920, when it was founded, the school was housed in Lawrence Hall on Kirkland Street, just outside Harvard Yard. Built in 1848 from a $50,000 gift from Boston industrialist Abbott Lawrence, the dark brick Italianate-style building was initially used for the Lawrence Scientific School (a precursor to the School of Engineering), including as a residence for Lawrence’s first professor, Eben Norton Horsford, founder of baking powder.

As the building aged, students and faculty developed a love–hate relationship with the space. In a 1961 Harvard Crimson interview, Dean Francis Keppel pointed to the ceiling of his Lawrence Hall office and said, “See those cracks? We had to remove 30,000 books from the library upstairs because we were told the second floor would cave in.”

Gregory Anrig, M.A.T.’56, C.A.S.’60, Ed.D.’63, in a 1988 oral history project, said of the space, “You come to Harvard and you think of all of this wealth and the tremendous resources in this university, and then you go to the school of education ... in this dingy little building. With a heavy German accent, Professor Ulrich used to refer to his basement lecture room as the ‘horse stables.’”

Ulrich, in an essay published in the 1970–71 Bulletin, added that the lecture hall was “equipped with benches which looked as if they had been bought from a defunct monitorial school of the 1830s. No state school department would have allowed them in even the poorest district. ... One hot day, the benches got stuck to the trousers of the students. It was difficult to separate the humanity from the wood.”

And yet, Anrig added, “there was something about the atmosphere of that place, because it was so old and decrepit in many ways, there was something very gracious about it at the same time. ... The facilities never made the difference in this program. It was the rather remarkable relationship you had with the faculty and, at that time, the structure of the program itself, which I found to be just tremendously beneficial to me.”

In 1962, the Ed School moved to Appian Way with the purchase of Longfellow from Radcliffe. Lawrence Hall fell into disrepair and was abandoned. In 1970, a group of graduate students took over the building and started the Free University as a way to provide an alternative education to Cambridge residents. The Free University Commune, a collective of local homeless people, also moved in. The building was slated for demolition to make way for, as it was once described, “the beige sprawl of the new Science Center.” On May 8, a fire broke out on Lawrence Hall’s third floor and the building was destroyed.