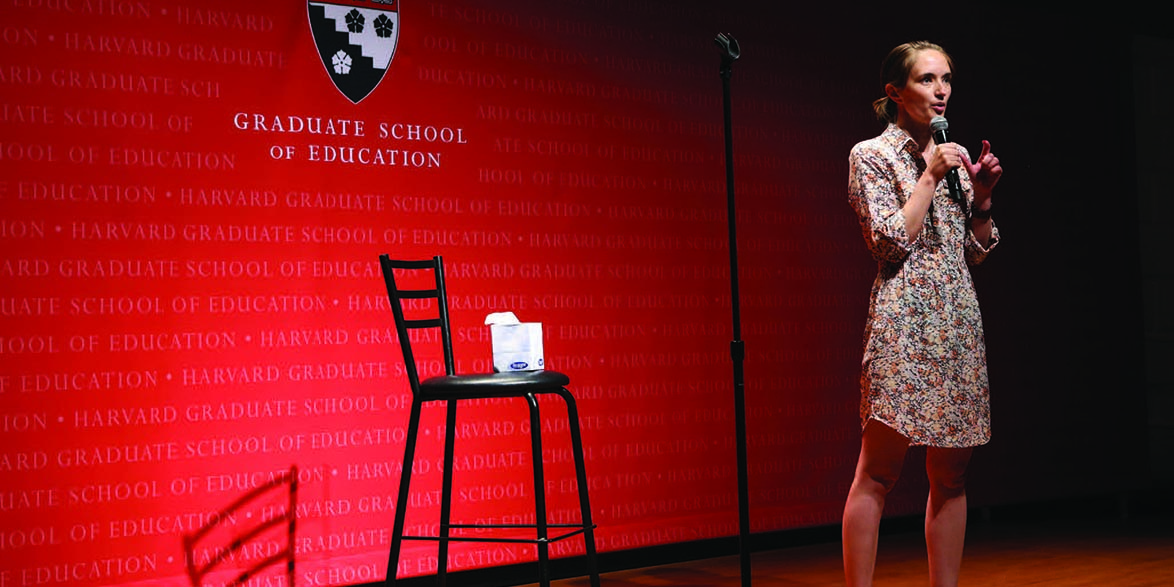 Rilda Kissel on stage at Double Take in 2017

The first thing I thought as I stood on the Askwith stage that day in 2017 is, “My friend Matt is a liar.”

Matt was the director of digital communications strategy at HGSE and helped to create and expand Double Take. Double Take was conceived by Dean Jim Ryan, who had a personal interest in storytelling and knew it was a valuable tool for education. He wanted to see a storytelling event at HGSE. As an avid listener of the Moth, I was intrigued, but I had never told a story beyond the confines of the dinner table.

Not only was the event popular, but the first iteration filled Askwith Hall to capacity. To top it all of, Dean Ryan opened the evening with his powerful and personal adoption story. He was followed by 10 incredible stories told by master’s and doctoral students alike, all deeply moving. I was a staff member and I was the closer. There are few times in life I have ever been more afraid.

As I stood on the stage about to tell a deeply personal story to the students in my programs, to my colleagues, to faculty at Harvard, it all suddenly felt fraught with risk. I felt very vulnerable.

Somehow, my words took over, and that night, I told the painful journey I have been on leading to my mom’s diagnosis of Alzheimer’s disease. I told the audience about her, what it feels like to lose her in this way, and hopefully for a few minutes, I made the audience feel the loss too. When I finished, all I remember is putting the mic on the stand, taking my seat, and feeling an incredible sense of lightness. I had left my story on the stage and I was better for it.

This event inspired a personal double take of my own interests and the ways I create and build community. I became involved as a Double Take coach for future sessions. I took a storytelling class through a local nonprofit, Massmouth. I participated in a series of Boston-area storytelling slams, which lead to a performance at Somerville Theater and on WGBH’s Stories from the Stage. Telling stories and more importantly listening to stories has expanded my capacity for empathy, understanding, and awareness.

Terry Tempest Williams said that “storytelling is the oldest form of education,” so it is fitting that HGSE created a space for stories to be told and heard.

Rilda Kissel is a program administrator at the Ed School who won a Massmouth's Audience Choice Award in 2019.