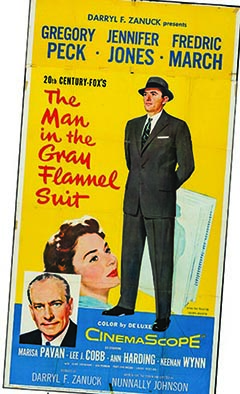 The name Roy Larsen is familiar here on Appian Way, but back in 1955, it was also well known to novelist Sloan Wilson who featured a boss in his second book, The Man in the Gray Flannel Suit, patterned after Larsen, a longtime visiting committee member and Ed School donor who eventually had a building named after him.

As it turns out, just before Wilson wrote the novel (which became a bestseller and movie starring Gregory Peck), he handled public relations for Larsen, who was the powerful head of Time-Life Publishing in New York. Larsen didn’t realize it at the time, but Wilson was studying him. Wilson told the Harvard Crimson in a 1992 interview, “Initially, I couldn’t figure out what made this man rich and powerful.” Not surprising, it’s the same puzzle that Tom Rath, the main character of the novel (and Sloan Wilson’s alter ego), tried to solve about his boss, Ralph Hopkins, president of a fictional Manhattan-based television company.

It’s unclear if Wilson ever completely figured Larsen out, but there’s no doubt that Larsen was content with how he was loosely portrayed and never tried to meddle with Wilson’s words. After Wilson showed Larsen an early draft of the novel and asked if he wanted to change anything, Larsen simply wrote back, “Say anything about me except I changed a good book.”