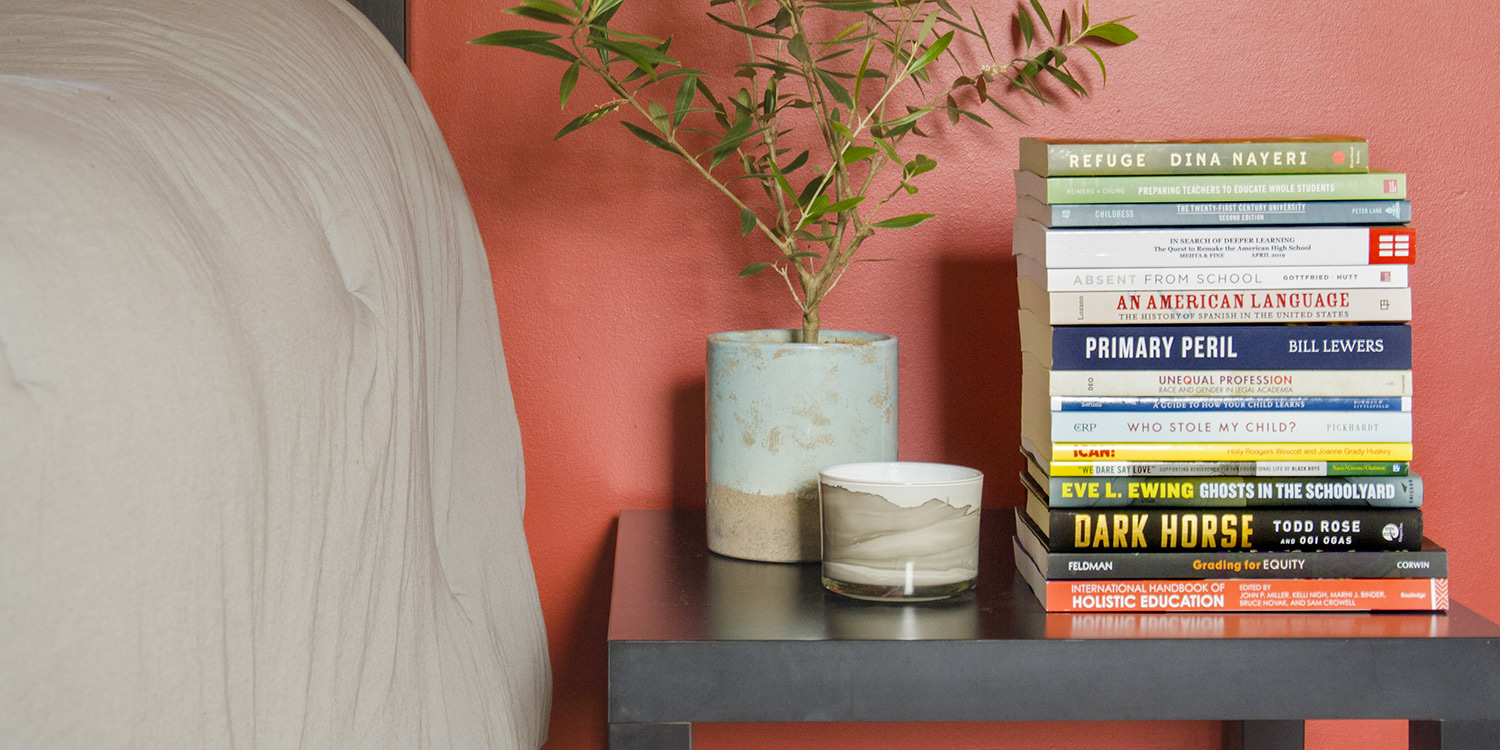 Recent books published by members of the HGSE community On My Bookshelf: Aaliyah El-Amin

ICAN! A YOUNG WOMAN’S GUIDE TO TAKING THE LEAD
Joanne Grady Huskey and Holly Rodgers Wescott
For many years, Joanne Grady Huskey, Ed.M.’78, and Holly Rodgers Wescott have been working with young women through the leadership training organization they started, iLive2Lead. This book is based on the training curriculum they developed and share with young women at their summits. However, as they write, the book is meant to help not just the young women they have already worked with, but also young women around the world who want to learn the skills necessary to articulate and execute the ideas they have as they try to make change in their communities.

DARK HORSE
Todd Rose and Ogi Ogas
In his latest book, Lecturer Todd Rose, Ed.M.’01, Ed.D.’07, faculty director of the Mind, Brain, and Education Program, and Ed School visiting scholar Ogi Ogas, look at women and men who have achieved great success despite being, as the title points out, dark horses — the winners nobody saw coming. Some of these dark horses did poorly in school or dropped out at various stages. Some did well but switched careers and followed an unorthodox path to success. What they found was that there wasn’t one defining character trait they all shared, such as a desire to prove themselves to the world. Instead, the one common thread they did discover: Dark horses are fulfilled.

“WE DARE SAY LOVE”
Jarvis Givens, Na’ilah Suad Nasir, and Christopher Chatmon
In this collection of essays, the editors, including Assistant Professor Jarvis Givens, look at what it means to educate black male students in a large urban district. Specifically, they look at the African American Male Achievement Initiative in the Oakland Unified School District in California, a program that is rooted in love and success for black males. “We are not all the same!” one author writes in his chapter. “This book offers an anti-deficit, anti-essentialist perspective of black males’ performance in schools and gives nuance to the stark realities that young men face — some thriving, some struggling, some making progress, others seeking a place to be recognized for their full human potential.”

WHO STOLE MY CHILD?
Carl Pickhardt
With more than 15 books on parenting, author and psychologist Carl Pickhardt, Ed.M.’66, has tackled everything from screaming to boomerang kids to why good kids act cruelly. In his latest, Who Stole My Child?, Pickhardt wrestles another thorny topic: adolescence. With easy-to-follow language, Pickhardt navigates parents, caretakers, and teachers through the often confusing stages of that age. Being prepared and knowing what developmental changes to anticipate during this period in a kid’s life (roughly ages 8 to 18) can help significantly during what Pickhardt calls “the harder half of parenting.”

GHOSTS IN THE SCHOOLYARD
Eve Ewing
Eve Ewing, Ed.M.’13, Ed.D.’16, knows Chicago. She grew up there. She taught there. Now she’s back as an assistant professor at the University of Chicago. So in 2013, when Mayor Rahm Emanuel announced that the city was going to close 49 schools in an effort to combat massive debt, sagging enrollments, and schools with low test scores, and the move was met with fierce opposition, Ewing wondered, “if the schools were so terrible, why did people fight for them so adamantly?” In her new book, Ghosts in the Schoolyard, Ewing explores that question and encourages any district considering closures to ask additional questions such as: What does this institution mean to the community? Who gets to make the decisions? And how do race, power, and identity inform what happens?

Ghosts in the Schoolyard: Racism and School Closings on Chicago’s South Side, Eve Ewing, Ed.M.’13, Ed.D.’16

Who Stole My Child? Parenting Through the Four Stages of Adolescence, Carl Pickhardt, Ed.M.’66

In Search of Deeper Learning: The Quest to Remake the American High School, Associate Professor Jal Mehta and Sarah Fine

An American Language: The History of Spanish in the United States, Rosina Lozano, Ed.M.’01

Grading for Equity: What it is, Why it Matters, and How it can Transform Schools and Classrooms, Joe Feldman, Ed.M.’93

A Guide to How Your Child Learns: Understanding the Brain from Infancy to Young Adulthood, David Sortino, Ed.M.’81