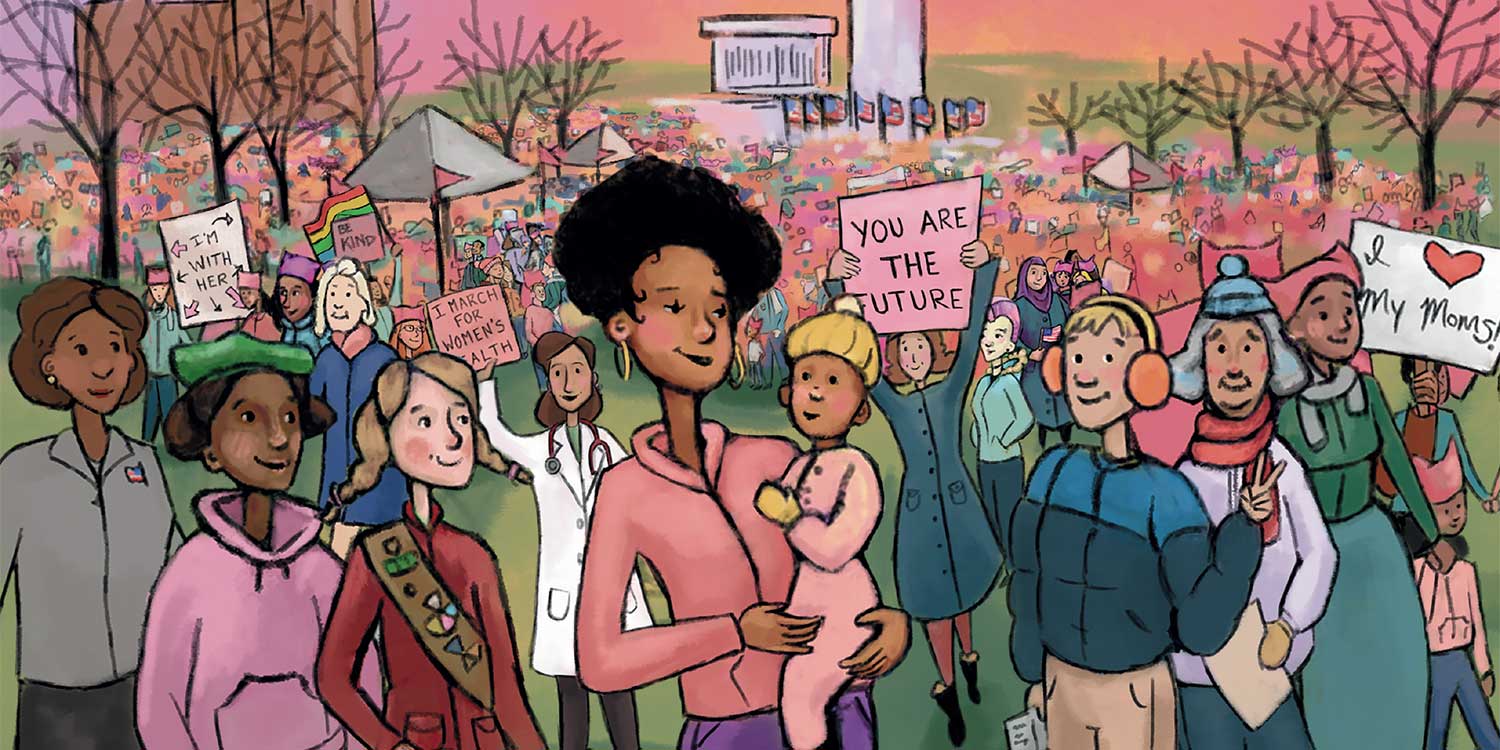 When plans started shaping up last year for the 2017 Women’s March, Adena Raub Dershowitz, Ed.M.'08, decided to take the train down from her home in Queens, New York, to Washington, D.C. She knew it was going to be an important day. But as the march got closer, she started having doubts. Her twins were only about 9 months old; juggling everyday life with infants was hard enough.

“I was totally motivated, but at the same time, I was torn,” she says. “I wasn’t in the same position I was a year ago, where I could canvass and knock on doors and go to marches. My time wasn’t mine anymore.”

Raub Dershowitz ended up going and was so inspired that the next day, back home, she talked nonstop about the event while feeding the twins.

“I was explaining to them in my baby-talky way where mom was the day before,” she says. Of course, they didn’t understand what she was saying, but she talked anyway. She wanted them to learn about standing up for what you believe in. Then she realized that translating an adult experience in a way that kids could understand might be her way to contribute to the activism fueled by the march. What better way than a children’s book?

“Over the next couple of days, on my commute to work, I started drafting my ideas,” she says. When she told her parents what she was doing, they weren’t surprised. “They joke that when I was about 5, I’d constantly say that I was going to write a book, and then I’d go in my room and write a book.”

This time, the book got published. In February 2018, Women Who March, a 28-page children’s book illustrated by Heather Workman, debuted.

The process was interesting, she says, and she discovered more than she expected about self-publishing.

“I learned about all of the steps involved, about ISBN numbers, how to get a book on Amazon,” she says. “A lot of it was learned through online communities. For every interest there’s a group to connect with.”

Online is where she found an illustrator. A writer friend recommended Upwork, a site for freelancers. She posted the job and a couple of illustrators showed interest, including Workman.

“She was passionate about the cause, and we hit it off,” says Raub Dershowitz, an administrator at a school in New York. “It was important to me to have an illustrator from the United States; in this particular story, it was so U.S.-focused. And I wanted a woman.” She also needed someone willing to take a pay cut. “It was a charity project, so I couldn’t spend a ton of money.”

Royalties from the book are donated to nonprofits, a new one each month. In March, it was National Organization for Women; in April, Postcards to Voters; in May, the Sister District Project; in July, RAICES. Raub Dershowitz says she only chooses partners who focus on equal rights activism. The partners also help with promotion on their sites and through their channels.

Although Raub Dershowitz says she has no idea if there’s another book in her future, she does hope that when the twins, now two, are old enough to truly understand why she wrote the book, they’ll be baffled.

“I hope they’ll think it’s the most ridiculous thing we had to do, that we had to fight and mobilize and push against the idea that men are superior to women,” she says. “I hope they find that absolutely insane. I also hope they know it’s important to stand up for what they believe in and that they are out there expressing what’s right, and not just for issues that affect their own lives. We’re only all free when we’re all free.”