Mission Control, This Is Your Teacher Speaking 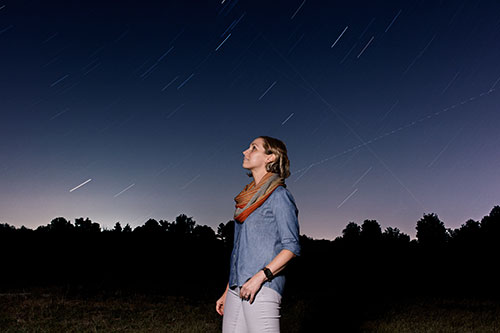 As odd as it sounds, the students in Jenny Kostka’s high school physics class were expecting an out-of-this-world announcement from their teacher when they started school this part September. And they were almost right.

“The first day, students came up to say they were really excited,” Kostka, Ed.M.’15, says. “They saw the word NASA on the school’s web page and thought I might be going to Mars.” While their teacher won’t be traveling to a distant planet any time soon, Kostka will be bringing outer space to her students, thanks to a new partnership between NASA and WGBH, Boston’s PBS station.

Kostka was selected as one of a team of 50 K–12 teachers to serve as advisers for a project called Bringing the Universe to America’s Classrooms, which will provide access to all of NASA’s available online data, ranging from interstellar measurements of electromagnetism to 3-D models of the Cassini spacecraft, including new curriculum material that Kostka and the other teacher advisers are helping to develop.

Kostka had a chance at the end of last school year to look at examples of what the project had already created. This fall she served on teacher focus groups while also designing and piloting new curriculum in her classroom, which she will continue doing throughout the rest of the school year. The teaching tools and resources, which will eventually be offered free to anyone, are focused on STEM topics in Earth, space, and physical sciences.

From the beginning, teacher involvement was critical to WGBH’s proposal to NASA in developing the curriculum. Kostka says she is excited to be part of the adviser team because they can help shape material so that it’s actually useful for teachers.

“Sometimes you see resources meant for teachers and think, I can’t really see teachers using this,” Kostka says. “Lots of times teachers want to make something their own; they don’t want a full lesson plan. I don’t expect to see full, scripted lesson plans [from NASA]. This curriculum will be much more flexible, which a lot of teachers will appreciate.”

Kostka has been teaching astronomy and physics for more than a decade, but her passion for science goes beyond the lab or the classroom.

“It makes you look at the world in a different way if you really understand how things work,” she says. “If you’re driving down the highway, and you think the pavement is wet on a hot sunny day, you know why. It jumps out at you in everyday life all the time.”

This enthusiasm for science was just one of the qualities that made Kostka stand out in a pool of 650 applications. A panel of judges selected candidates through a blind admission process. Those selected were noted for their willingness to innovate in the classroom and their enthusiasm for digital resources, says Denise Olson, senior marketing manager for education at WGBH, all traits that Kostka possessed.

“What stood out for us about Jenny was the fact that she teaches astronomy and is already familiar with NASA resources, as well as her educational technology background,” Olson says.

Before this project, Kostka had already begun to use more technology and digital resources in her classrooms. But she credits her time as a member of the Technology, Innovation, and Education cohort in driving her thinking about how to make those resources more creative and student driven.

“The classes I focused on [at Harvard] were about using things more creatively in the classroom and getting students to create using digital media,” Kostka says. “I’ll try and make that a priority to make these [NASA] resources a vehicle for creation for students and not just a digital worksheet.”

Andrew Bauld, Ed.M.'16, is a writer currently living in Chicago.