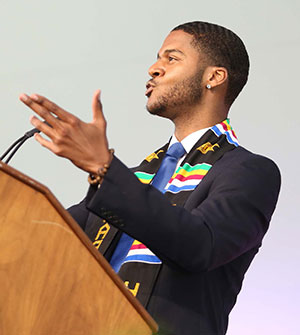 It started out with impressive numbers. Less than one day after Donovan Livingston, Ed.M.’16, gave the Ed School’s student convocation speech, where he talked in spoken word about no student being common and about education not being the great equalizer that it should be, nearly 1.5 million people watched a video of his "Lift Off" speech on Facebook.

And then things blew up.

Celebrities started tweeting about the speech, including Justin Timberlake, Jada Pinkett Smith, Piers Morgan, and Joyce Carol Oates. Hillary Rodman Clinton shared it on her campaign Facebook page. Within days, Livingston was being interviewed by NPR, CNN, Good Morning America, People, and The Washington Post. Less than a week in, 11 million people saw the video on Facebook and more than 500,000 on YouTube. Nearly 12,000 left comments on the Ed School’s Facebook page. By the middle of the summer, the tweets and the shares and the likes were still going strong.

What did Livingston, who started a Ph.D. program this fall at the University of North Carolina, think of all of the hubbub? As he told an ABC News reporter, “I didn’t know it would be so well received. Whenever you put yourself out there, especially with poetry, you’re making yourself vulnerable,” he said. “However it was received, I would’ve felt great at the end of the day because I was being myself, but the fact that it blew up the way it did is a humbling experience.”