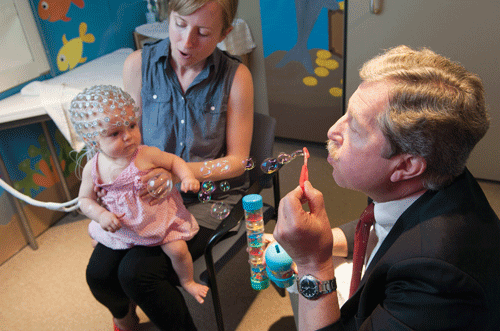 He has an uncommon title for a faculty member at an education school: professor of pediatrics. Even the hallway outside his office, with the big wooden play castle and floor-to-ceiling mural of a jungle, looks more like the waiting room of a doctor who works with children than that of an academic. But Charles Nelson is not a pediatrician — he's a researcher, one whose work here at the Ed School is growing.

And it makes perfect sense: He studies the brain and behavioral development of young children, including how they learn. Most recently, he has been looking at infants with autism and their unaffected siblings. Based at Boston Children's Hospital, Nelson's initial connection to the Ed School began in 2005, after he arrived at Harvard from the University of Minnesota. He guest-lectured in a few Mind, Brain, and Education (MBE) classes and collaborated with the Center on the Developing Child. He also started advising students, including his first, Adrienne Tierney, Ed.M.'06, Ed.D.'11, now a faculty member at the Harvard Writing Program. He invited several Ed School students to work in his lab at Children's.

But Nelson wanted a deeper connection to the Ed School.

"I really wanted to have more of a footprint here," he says. "I really wanted to feel like I was part of the faculty." Last year, Nelson was officially named an Ed School professor. Nelson also missed teaching, something he wasn't doing at Harvard Medical School, where he was also affiliated. This past fall, he taught his first Ed School course, Typical and Atypical Neurodevelopment. He's now on the MBE admissions committee, mentors 10 master's students in the MBE Program, and continues to advise doctoral students, including his first from the new Ph.D. Program — April Boin Choi, Ed.M.'13, who started working with him on the infant sibling project when she was in the MBE Program.

Choi says that despite Nelson's busierthan- ever workload, he has remained a committed mentor.

"Even with all of the demands on his time, Chuck always gives his best effort to offer advice and wisdom," she says. "He has provided numerous learning opportunities for me to advance my goals as a researcher."

Tierney met Nelson when she was in her second year of the doctoral program. He was guest-lecturing in a core MBE class and talked about his projects. She was hooked.

"His work was stunning," she says, specifically about the infant sibling project, which was just starting up, and the Bucharest Early Intervention Project, his groundbreaking examination of the effect of early institutionalization and foster care on orphans in Bucharest, Romania. "His work touched on so many interesting elements of developmental science. … I had been trying to find a way to combine my background in neuroscience with the developmental components of learning and cognition that I was learning about in the first few years at the Ed School. His infant sibling project seemed to be doing just that — using measures of brain activity to understand the emergence of the disorder. I started working in his lab shortly after that."

Tierney says she was lucky to have had Nelson as her adviser, not only for the reasons one would expect — he was supportive and always interested in her work — but also another, perhaps more important reason: He allowed her to have wings.

"Throughout my time in the Ed.D. Program, he gave me a lot of independence, which for me is the way I work best," she says. "This may seem like a clichéd thing, but he really trusted me to do good work, and having that combination of independence and responsibility for my project allowed me to become a more confident researcher."