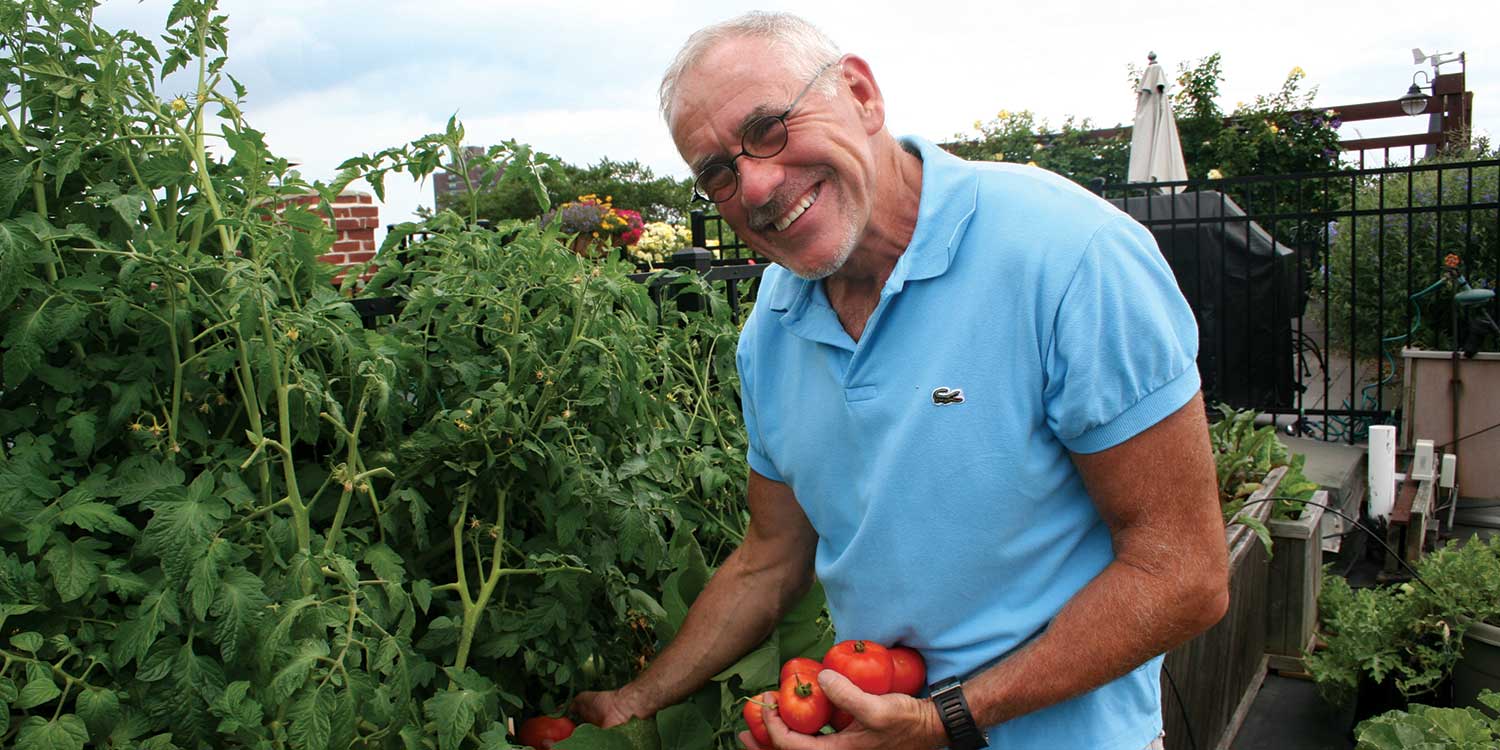 Professor Tom Hehir has a great garden. Peppers, tomatoes, spinach, cucumber, lettuce, eggplant, watermelon — you name it, he probably grows it. But if you want to see it, don’t look out back. Look up. Five flights up.

Hehir’s garden is on the roof of his brownstone in Boston’s South End, with views of the Prudential Center and Copley Place. And it’s not the first urban garden that he’s created. He had one in Washington, D.C., and another in Chicago, the latter enveloping the balcony of his apartment on the 44th floor.

Asked why he does it, he says, “Mostly because I’m a foodie. I love to eat and there’s nothing better than fresh vegetables.” In one season, he’s able to grow more than half of the fresh vegetables that he needs for a year.

Since he started working the soil at his South End home, which he bought in 1980 when he was working for Boston Public Schools and the area was still affordable on a teacher’s salary, he has also found that rooftop gardening has other benefits. The winter freeze tends to come later in the city and containers thaw faster than the ground does in the spring. City living also means fewer bugs and pests so he has never had to use an insecticide.

“It’s also very green. It keeps the house cooler and the vegetables don’t need to be transported,” he says. “People are waking up to the potential of roof gardens and the need to support local agriculture. I walk around the South End and wonder what the impact would be if every roof was used for growing food.”

There are challenges, too. It’s a lot hotter on the roof. Although that allows him to grow crops like watermelon, which often eludes New England ground gardeners, it also means containers dry quickly and he needs to rely on the irrigation drip system he installed a few years ago.

Growing up, Hehir says his family always had a garden, but his interest in harvesting his own really grew out of an experience he had one summer when he was teaching at a technical high school in Framingham, Mass.

“I was asked to oversee a big vegetable garden for a community of retired Jesuits in Weston [Mass.],” he says. “The priest was a friend of my uncle who was also a Jesuit. He knew that I had been a greenskeeper at a golf course in the summers during college and knew that I knew about things like soil culture.” The priest also knew that Hehir had a background in special education, which helped him effectively communicate with the grounds crew, many of whom had mental challenges.

“Ever since then, I’ve had gardens,” he says.

Asked if he ever longs for more space, he says he has all the space he needs (except to grow corn, which requires too much soil).

“I plant what I need to eat and I preserve what’s preservable,” he says. “It’s all I need.”