Remaking the Classroom — and the World

In Houman Harouni’s classes, power structures are questioned, discomfort is embraced, and even the act of teaching is subverted.
By Emily Boudreau
November 7, 2019 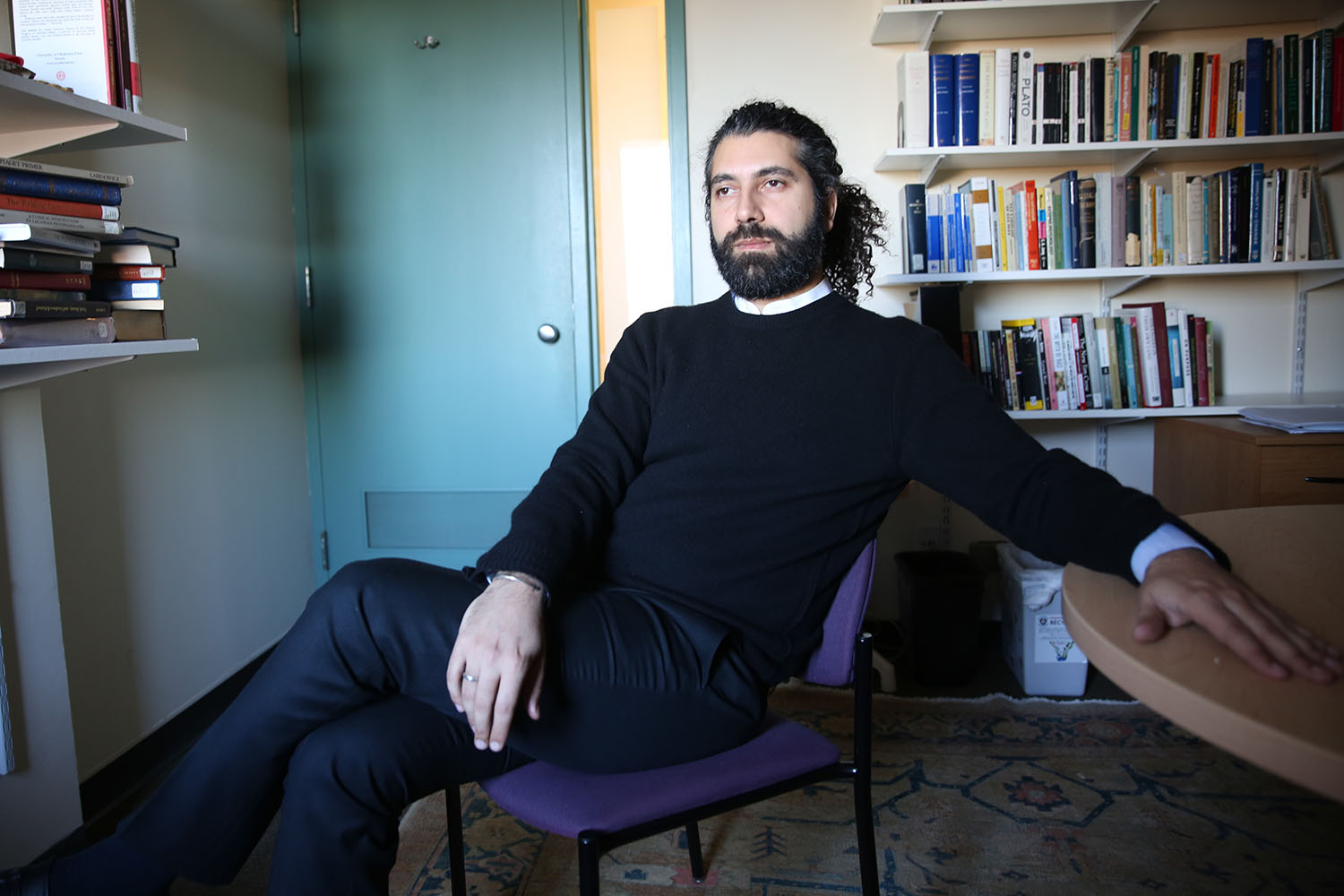 Lecturer Houman Harouni, Ed.M.’08, Ed.D.’15 opens his fall course, Critical Theory: Identity, Politics, and Practice, with a simple invocation: “Let us begin.” But it’s the students who immediately begin speaking. Over the next three hours, instead of lecturing, Harouni stands at the front of the room as the class explores the question, “What is a commodity?” For 90 minutes, the only time he speaks is to ask several students, “Can you say more about that?” And yet somehow the discussion moves, in substantive and surprising ways — from the value of education, to who has the power to determine that value, to what it means to work in relationship to systems of power, and finally to the students themselves and their own desire to change those systems.

In course evaluations for Critical Theory and for his spring offering, Power and Pedagogy: Self, Society, and Transformation, his students have called Harouni “a poet,” “a sage,” and “a projection in your mind.” And his professional life has been just as esoteric and elusive — he’s studied political science and engineering, worked as a journalist and an elementary school teacher, and has taken up dancing. He says he tries to teach himself something new every year, or tries to incorporate a new practice into his life. “It really keeps you compassionate and reminds you how much you could be doing in your own work that you haven’t considered yet,” he says.

Indeed, Harouni’s own pedagogy is flooded with respect — a respect for learning, and also for the learner, which he attributes to his upbringing in Iran. “There was tremendous respect for the child [as an intellectual thinker] in my household,” he says. “You were never talked down to — you were allowed to have an opinion about the most complex issues, and at the same time, it was demanded from you that you do the background work.”

He also remembers that learning and questioning, particularly in schools and in the larger political environment, were not always esteemed in the way they were at home. “My father had been to jail several times for his political activities. The friends who would come to our home were his comrades,” Harouni says. “From the earliest stage I can remember, I was sitting listening to conversations and understanding there was a huge discrepancy between the conversations that were being had at home and the ones that were being had on television and eventually at school."

Questioning the Assumptions of Power

After immigrating to the United States at the age of 14, Harouni soon noticed that the American school system, even at the university level, also offered little room for real political discourse. “It wasn’t like politics were irrelevant to the lives of the people I was looking at,” he says. “It was just decided it was more important to do your lessons.” Lessons, it should be noted, that seemed to Harouni more concerned with reinforcing the status quo than with providing space for critical and systemic thinking.

Frustrated, Harouni turned to education as a lever for political mobilization and social change. He worked as a teacher and an administrator in alternative and public schools but soon found himself confronted with a serious question: Why was it that with all of his good intentions, with all of his life experiences, all the books he had read, and a clear idea of the problems he wished to confront  — why was he still teaching in the same way all the teachers he had criticized taught? Why did certain elements of schooling persist, even if he disagreed with them?

Hoping to find answers, Harouni traveled to Appian Way — first as a master’s student and then as a doctoral student. While at HGSE, he found himself tremendously influenced by Professor Eleanor Duckworth and her instructional, student-centered pedagogy. If students were the true locus of learning, then the power relations within a classroom needed to be addressed.

“Eleanor taught me to teach something without telling students answers, without being attached to the end goal,” he says. ”You had to take seriously a student’s direct encounter with something in the world. And you had to listen. And this was a painful thing to learn.” Painful because it undoes the teachers’ understanding of their own power in the classroom; painful because teaching without telling is difficult for even the most advanced practitioners; painful because truly listening to another human being is never easy.

"I’ve always had a mandate from the institution to expand our understanding of what makes certain conversations difficult, to give students a space to engage in those conversations and to unearth their own assumptions, and finally to think of themselves as serious intellectual practitioners.”

As a doctoral student, Harouni looked at the field of mathematics education. Rather than just being a vehicle for teaching basic arithmetic and critical thinking skills, Harouni found that math instruction is rooted in the same power systems — social and economic — that govern daily life. In 2015, he began to teach a class that would serve as the foundation for Critical Theory, where students could engage with and question their own theories of power.

He found in HGSE a community that was supportive of pedagogical experimentation. “I’ve always had a mandate from the institution to expand our understanding of what makes certain conversations difficult, to give students a space to engage in those conversations and to unearth their own assumptions, and finally to think of themselves as serious intellectual practitioners,” Harouni says.

He was given a tremendous amount of freedom in the creation and evolution of both of his courses, so he set about uprooting the typical structures accompanying higher education instruction. First to go was a prescribed curriculum. Technology allowed Harouni and his team to assign reading that directly addressed the needs of students in the moment. Emulating his own experience in Duckworth’s class years before, Harouni also removed himself from the conversation. At the same time, he devised ways of intervening in the discussion that force students to question their own conceptions of teaching and authority. Lecturing for three hours about theorists would not allow students to access their own encounters and assumptions about existing power structures. The final key revision was to have students write three pages about an issue related to education that keeps them up at night. Over the course of the semester, students rewrite this one paper five or six times. The revisions are not necessarily to improve the writing itself but to deepen thinking, to rework beliefs and ideas until they become unfamiliar or emerge as a real lever for change.

Staying in the Discomfort

Ed.L.D. student Lance Huffman took the course knowing only what the experience would not be — it would not be a lecture or a “turn-and talk” session. “All I could guess, from the preview, was that it would be uncomfortable,” said Huffman. “What he [Harouni] told me is what convinced me to enroll: He said that the discomfort I should feel — as a white man leading many people who do not share my identity — in my chosen work, I would be incentivized to turn away from. I should not turn from that discomfort, he said. This course, he promised, would give me practice at staying in the discomfort.”

Harouni’s students often find that what they thought they knew — or what they had accepted as true — is upended by writing and discussion. Harouni “created a space through which I examined what was previously too obvious for me to bother to try to understand: the roles of teacher and student, the desires of any group, the projects inscribed within the walls of a classroom,” says Jais Brohinsky, Ed.M.’17. “In transforming the ‘normal’ and ‘mundane’ into something strange, I look at the world and ask not only how it works, but how it might be different.”

Because the course prompts students to think critically about problems, they also start to think about the ways in which they might become advocates for change. “In the process, it turns out that while I was doing this, the course I thought was just about pedagogy turned out to be about leadership,” Harouni observes. “[Students] begin to grapple with the question [of] who has the right to determine the content of the classroom, and by extension any other organization, and what gives that person that power.”

As a result of these intense classroom discussions, students often turn the lens around on themselves, asking, Who am I? How did I come to believe what I believe, and how can I engage in conversations with people who disagree with me? Because HGSE students tend to find value in these kinds of conversations and want to avoid surface dialogues, Harouni has stepped in to lead the year-long Equity and Inclusion Leadership Practicum for the Equity Fellows, to facilitate these kinds of conversations across the school. He will also be offering a new course in the spring of 2020 called Alternative Modes of Education: Non-European, Radical, and Utopian.

Rosette Cirillo, Ed.M.’15, found that the Power and Pedagogy course gave her a strong foundation for challenging common assumptions in public education. “As a public school teacher in the Chelsea Public Schools [in Massachusetts] for four years, I never shied away from difficult conversations or confrontations with authority,” she says. “I credit this largely to working with Dr. Harouni, who showed me that leadership can often be defined by saying what's left unsaid and challenging the assumptions that hold back a community's work. For educators and leaders working toward a just future for all children, nothing could be more critical.” With recommendations based on research and relationship-building, students in HGSE course influence state policy and make real-time impact in the field.