As the groundbreaking program turns 50, a look at the long and impactful partnership between HGSE and Sesame Workshop.
By Emily Boudreau
September 24, 2019

Sesame at 50: Celebrating 50 Years of Sesame Street and Harvard

Senior Lecturer Joe Blatt shares the Muppet made in his likeness with HGSE students Felipe Estrada-Prada (left) and Rubin Soodak. 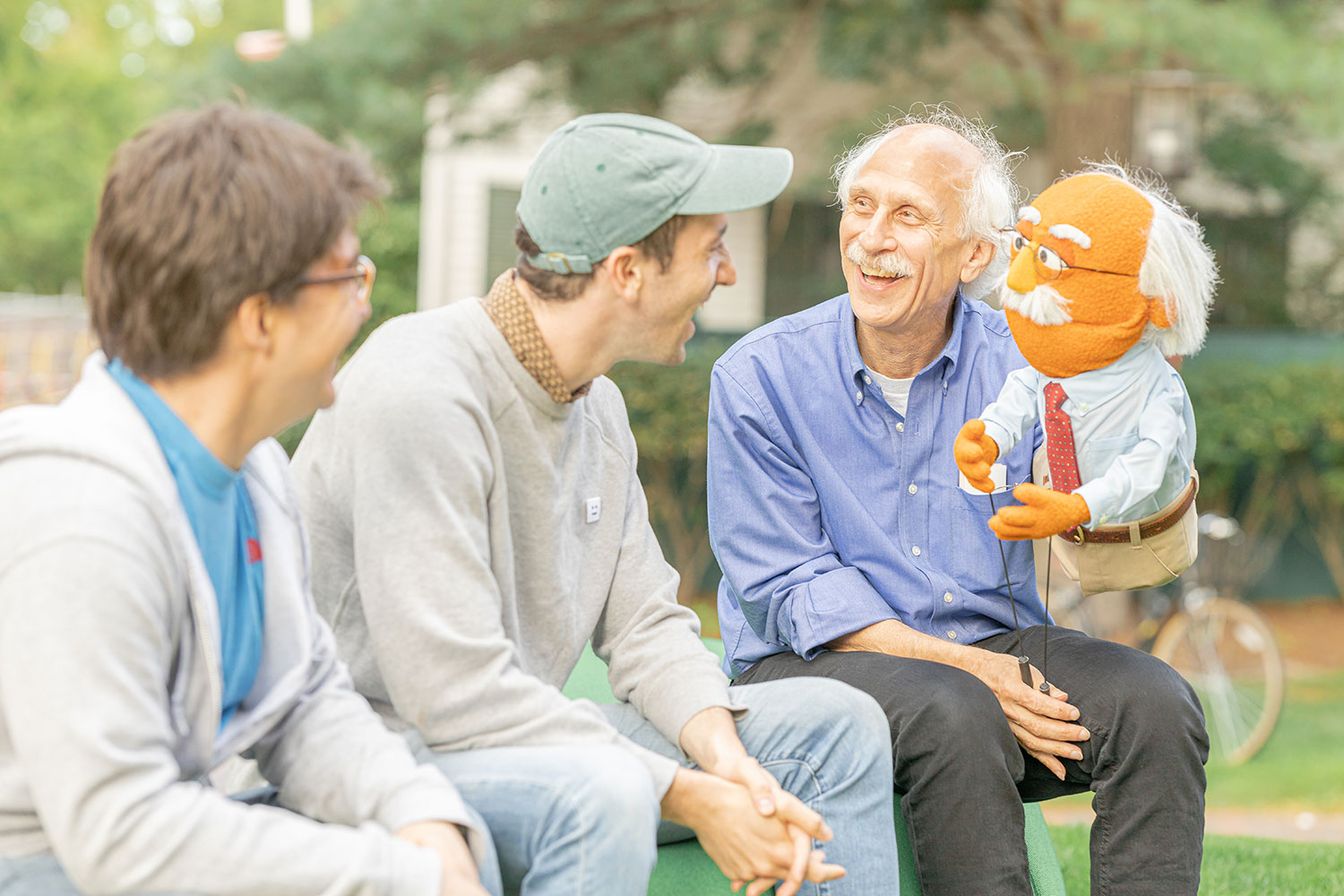 Senior Lecturer Joe Blatt shares the Muppet made in his likeness with HGSE students Felipe Estrada-Prada (left) and Rubin Soodak.

For the past 50 years, generations of young children have arrived at 123 Sesame Street and felt as if they were home. For its audience of young viewers, Sesame Street was a neighborhood of warmth, kindness, and acceptance — a place where you could spend time learning the difference between near and far with Grover, discovering the importance of the letter “C” (it’s for cookie), and counting with a numerically obsessed vampire.

But beyond the happy memories that Sesame conjures, there’s a less well-known story about its lasting impact on children’s education. Most viewers and their parents probably never knew that the catchy songs, witty sketches, and even the relationships between characters were — and still are — backed and supported by years of research driven by a longstanding partnership with the Harvard Graduate School of Education.

Today, scholars widely recognize that media — television, film, apps, and other digital tools — can be a powerful learning instrument, but that wasn’t always the case, especially where young children were concerned. “It’s hard for people to recognize just how radical the idea of Sesame Street was in the late 60s,” says Joe Blatt, a senior lecturer at the Harvard Graduate School of Education who has continued to steward the relationship between Harvard and Sesame Street. “People assumed that TV was a bad influence on kids, was interfering with learning at school or home, and that if young kids had any interaction with media it would just be for entertainment.”

Through a carefully researched and tested curriculum, the show proved many of those assumptions wrong. “From the very beginning, Harvard, directly and indirectly, played a large part in Sesame Street’s success,” says Jeff Dunn, A.B.’77, M.B.A’ 81, A.L.I.’14, president and CEO of Sesame Workshop. “Our shared conviction that there is nothing more critical to a child’s development, and no greater force to effect change in the world than education, led to a bold experiment. Teaching young children through television worked beyond any measure we could have imagined.”

With its diverse cast, urban setting, animations, and, of course, its Muppets, Sesame Street didn’t look like any other children’s show on television when it premiered in 1969, and it didn’t intend to entertain kids in the same way other TV shows did, either. Joan Ganz Cooney and Lloyd Morrisett (both founders of Sesame Workshop) and developmental psychologist Gerald Lesser, a longtime HGSE professor who died in 2010, believed that tropes common to popular entertainment — songs, animations, colorful characters — actually were valuable instructional tools. Cooney had a vision for a show that could help close gaps in learning in poor, urban centers, and Lesser’s research background in child development, curriculum development, and evaluation ensured the program could achieve that vision.

Lesser chaired the board of academic advisers who created the original curriculum for the series. He would continue to work with Sesame from its early stages in the 60s until he retired in 1998. Backed by assessments in classrooms and a study conducted in 1970 by the Educational Testing Service, researchers at Sesame and at Harvard soon demonstrated the show’s impact on learning for all children, including for low-income children.

“The idea was to spell out objectives so that researchers could measure and assess whether the show was achieving what it was supposed to and whether kids had actually acquired that knowledge,” says Blatt. For example, on a basic level, Sesame Street is teaching children the alphabet. But the learning on Sesame goes beyond memorization and recitation. Sesame’s content guides young learners not only to recite the alphabet but to recognize letters and sounds and to generate a list of words that start with a certain letter, in contexts beyond the show. A pedagogical structure underpins the animations and skits, emphasizing certain sounds or using lots of words that start with a specific letter.

Writers and producers at Sesame Street reinforced those curricular objectives with powerful, appealing storytelling elements common in television — the animations, stories, sounds, characters, comedy, and songs that have become the show’s trademark. Importantly, these rich, media-based learning experiences were accessible to children everywhere, regardless of their identities and socioeconomic backgrounds.

“No one who works in this area would ever argue that the richness of this media should remove the role of parents or teacher or are a replacement for well-disposed positive adults,” Blatt says. “But of course, a lot of kids don’t have a lot of well-disposed, positive adults in their lives, so there are gaps.” Both Sesame and HGSE have worked to fill in those gaps and ensure that millions of children around the world have access to quality educational content.

Sesame Workshop has continued to grow and refine this curriculum. A large part of Sesame Street’s narrative design and structure is now aimed at teaching children important social-emotional lessons like how to share or how to constructively express emotions. The show has added elements intended to reinforce traits like executive functioning and has introduced characters with autism and physical disabilities to acknowledge needs and voices of children and families all over the world.

Judith Palfrey, professor of pediatrics at Harvard Medical School, worked as a consultant to the Children's Television Workshop, providing insights about health and developmental topics. "The work taught me how education rooted in the fundamentals of child development could  bolster families, strengthen communities and help children to stay healthy and grow fully and happily," Palfrey says. Palfrey noted that much of her subsequent work in community pediatrics was guided by what she learned from the Workshop.

“There is no greater call than to make a difference in the life of a child,” says Jeff Dunn. “The Sesame Workshop-HGSE partnership has, over the course of half a century, helped to make that positive impact for countless children around the world. But our work has never been needed more; we at Sesame Workshop are committed to helping kids everywhere for the next 50 years and beyond, and we look forward to continuing to collaborate with our HGSE colleagues.”

A Rich and Ongoing HGSE Collaboration

HGSE continues to prepare graduates to take on key creative and production roles in educational media. As part of that preparation, Blatt teaches a course during January Term that focuses on analyzing and creating informal learning experiences like Sesame Street — and the wealth of other children’s media that has been inspired by Sesame. He also offers a course in the spring where students explore ideas for programming and initiatives, culminating in a final presentation to Sesame Workshop executives at the end of the semester. Blatt estimates that roughly 10–12 master’s students a year go on to pursue a career in children’s media after taking these courses — an important legacy of Sesame’s generous contributions to teaching and learning at HGSE.

"I think the preparation of educators who want to enter the field of media is just as important as preparing them to enter other sectors,” Blatt says. “Not every education school does [prepare students to enter this field]. If we didn’t do it, we’d be missing out on a significant part of our job, as more children find media a major part of their learning experiences.”

Indeed, a network of HGSE alums working in educational media as producers, writers, consultants, and curriculum designers means that many shows available to children now have a robust learning pedagogy behind them. And the children’s media landscape has changed drastically.

“One of the most important insights I gained at Harvard is that children learn best when educational experiences are relatable to the lives they lead,” says Charlotte Cole, Ed.D.’93, former head of global education at Sesame Workshop and co-founder of media company Blue Butterfly, who during her tenure at Sesame helped to develop 30 locally produced Sesame Street programs.

Kelly Whitney, Ed.M.’06, Ed.D.’13, chief product and partnerships officer at iCivics, also underscores the significance and the impact of Sesame Workshop’s approach to children’s media. “Children's media is most successful when it takes into account the world of the child from a developmental, educational, and cultural perspective; Sesame Street was the first program to integrate all of these lenses,” Whitney notes. In her current role, she continues to incorporate this framework into digital game-based learning. “It’s amazing to be a part of the HGSE legacy of producing highly engaging, high-quality educational content for children,” she says.

Though HGSE continues to serve as a portal to Sesame Street, the partnership has woven itself into the fabric of Harvard as a whole, as the Workshop has started to extend its educational reach beyond letters and numeracy. Faculty members and graduates of the law school, the medical school, the Chan School of Public Health, and Harvard College have contributed to the partnership.

Former Harvard Law School dean Martha Minow, Ed.M.'76, participated in the workshop course offered by Lesser when she was a student at HGSE. Her experience still shapes the work she does today. “Having the chance to work intensely to use research to inform an educational television show for children was exciting and rewarding; I also learned lifelong lessons about how to collaborate so that everyone contributed and felt invested in the work — and how to separate and protect the totally creative brainstorming process from the critical, editorial, judgment stage,” Minow says.

Across the decades, Sesame’s lessons have lingered for others as well, for the parents, educators, researchers, and media producers who share common memories of watching and working on the show. What has emerged from the collaboration between Harvard and Sesame Workshop is, in fact, extraordinary — a show that has inspired generations of learners, crossed racial and socio-economic boundaries, reached 150 countries, and continues to grow and develop.

“As writers, creators, producers, and researchers in the industry,” says Samantha Bissonette, Ed.M.’17, freelance writer and script coordinator at DreamWorks TV, “Sesame Street challenges us to be advocates for children and never lose sight of the real goal: to help every child become smarter, stronger, and kinder.”