The Intellectual Contribution Award recipient for Arts in Education reflects on her time at HGSE and looks toward the future.
By Marin Jorgensen
May 15, 2019 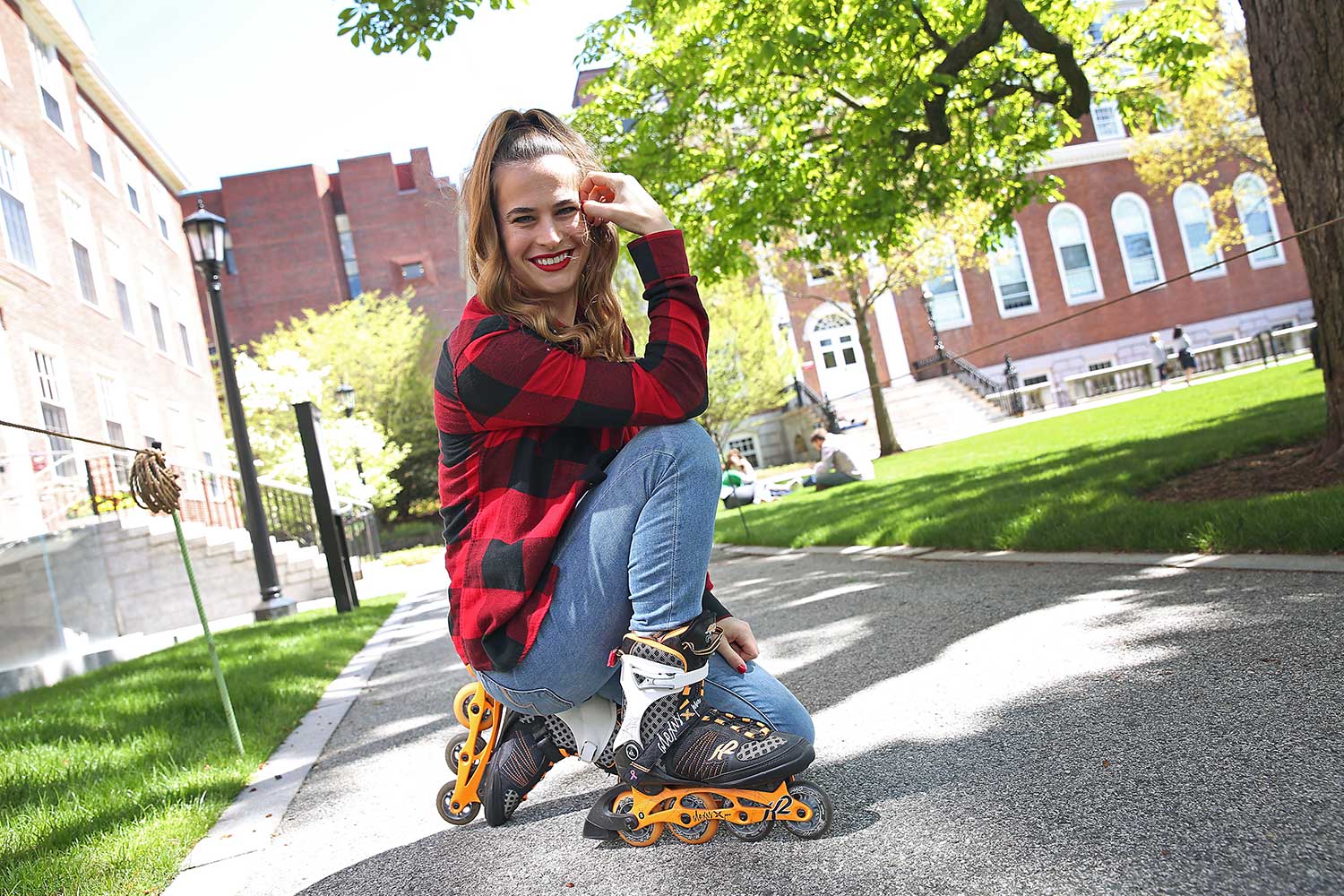 Although she has spent most of her career in the classroom, Ashley Hunker prepared for her role as teacher in a more self-directed way than most.

“My undergraduate degree is not in education,” she says. “I’ve learned largely from trial and error and the support of amazing colleagues along the way.”

So Hunker — who has taught dance, theater, and art integration in the course of her career — enrolled in the Arts in Education (AIE) Program expecting that some of her methods might need refinement.

“My goal upon entering the Ed School was to check in with people who know far more than I do to see if the way I’ve been doing things all this time has been ‘right’ and figure out where to go from here,” she says. “[I wanted] to learn all that I could as quickly as I could and archive that knowledge so that I could always call upon it as I move forward.”

“Always candid and to the point, Ashley taught us this year to embrace what we don’t know — yet never to be complacent about our ignorance,” says Senior Lecturer Steve Seidel, faculty director of AIE. “Coming to HGSE from two years as a humanities and dance teacher at an international school in Morocco, she is deeply practiced in looking across disciplines, cultures, and ways of knowing. For Ashley, a question is the start of an adventure, a search for possible answers, but with the awareness that the search is likely to take you places you hadn't anticipated or even imagined. She taught us to take this search on with humility, yet boldly, unflinchingly, with one’s whole self…and absolutely with a sense of humor.”

Hunker is excited to apply all that she has learned — and unlearned — moving forward. First stop: A position as manager of a summer camp in Hamilton, Ohio — the very camp at which she spent 15 summers growing up.

Here, Hunker reflects on her year at HGSE and looks at her future in education:

What was your greatest fear before attending HGSE? My greatest fear was that I didn’t have the “right kind” of smarts. I knew I was streetwise, travel wise, art wise, and Mexican food wise, but I wasn’t sure how I would fit in with the “classically intellectual.” I arrived having not read Locke, Rousseau, and the like. Though I had a foundational understanding of their contributions to the world, I mostly just knew them as characters from the old television show Lost.

Because I’ve received this prestigious honor, I feel that my kind of smarts is recognized and appreciated. Truthfully, I discovered this much earlier in my time here, when I had amazing and esteemed peers and professors validate my ideas, ask to hear more, and even laugh at my jokes. I leave HGSE knowing that many forms of intelligences are honored here, and each form makes its own invaluable contribution.

What is something that you learned at HGSE that you will take with you throughout your career in education? It is the artists, those who survive the assault on their creativity that occurs too often in the classroom, who will solve the world’s problems and keep life beautiful. The artist engages in the “making of worlds,” operating outside the restrictive parameters of the usual. Imagining freely can allow for solutions to rise to consciousness that would otherwise never come to fruition. That being said, it is critical to nurture the creative mind at every age.

Is there any professor or class that significantly shaped your experience at the Ed School? When is art? I didn’t even know that was a question, and I certainly never thought I would be asking something of the sort. Professor Catherine Elgin’s Art and Understanding was a compelling course in art philosophy that pushed my brain to the limits, and the discourse surrounding the enigma that is “languages of art” laid the foundation for some of my dearest friendships here at HGSE. This course, and the incredible Professor Elgin, shaped the way I will continue to experience art and engage with artists. “Art is when” there is a communicable wielding of symbols, in case you are wondering. Whether something is a “picture of a man” or a “man picture” is something I’m still trying to discern.

What will you change in education and why? “I will officially remove math from every school curriculum,” said the dance teacher who just counts to eight over and over again. Kidding. What I will change in education is the abstraction of it from the real world. Learning should not exist in a vacuum. If we want students to stop slamming textbooks shut while asking, “When am I ever going to need to know this?” we need to teach through examples of when one would need to know this. Communities are classrooms. I will take learners out into the real world so that they can appreciate the liberation that comes with an increased understanding of how things work and why things are the way they are. If we are teaching in a way where kids need to ask that question, I think we are failing to be true to the purpose of education.

The number one, biggest surprise of the last year was … I’m going to be an auntie for the first time ever this summer! Oh, and I’m (apparently) the only person who inline skates in the Boston/Cambridge area.

If you could transport one person/place/thing from HGSE and/or Cambridge to your next destination, what would it be? One person? Professor Tina Grotzer, end of story. One thing? The frozen margarita machine from Felipe’s Taqueria. El fin de la historia.