A Tribute to Tom Hehir, HGSE's Voice for Inclusion

The special education expert and professor, who retired this fall after 19 years at the Ed School, was a leading advocate for the rights of disabled children.
By News editor
February 19, 2019 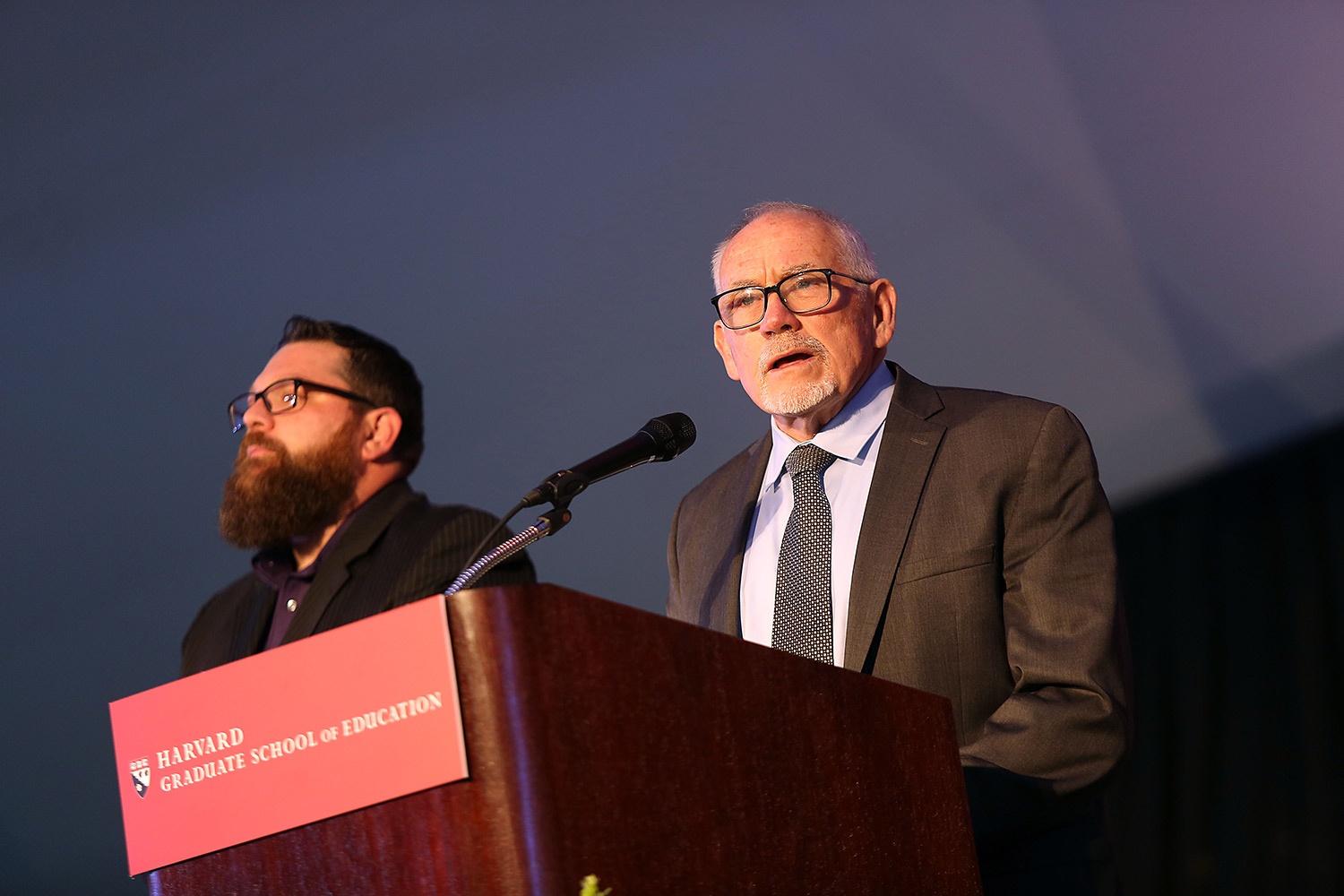 Over the course of his long and influential career in public service, policymaking, teaching, and research, Tom Hehir has been a unique and vital voice for students with disabilities, their parents, and the educators who serve them. On the occasion of his retirement from HGSE, we asked his former HGSE student Melanie Perkins McLaughlin, Ed.M.'17 to reflect on what Hehir has meant to her and to the field.

In 2007, I was stunned by a prenatal diagnosis; our third child had Down syndrome and a congenital heart defect. When Grace was a baby, she looked like every other baby, she was adorable. As she grew, the gap widened and we began noticing the way she was treated differently. We had to advocate for Grace to be included in our public preschool, learning the hard way that not everyone would be accepting of Grace’s differences. I began a fellowship in disability leadership and became the co-chair of the Massachusetts Department of Elementary Education Special Advisory Council (SAC).

At one of my first SAC meetings, we discussed the 2014 Review of Special Education in the Commonwealth of Massachusetts: A Synthesis Report by Professor Tom Hehir, Ed.D.’90, and associates. The report identifies three broad categories for improvement for students with disabilities in Massachusetts, including identification, placement in the least restrictive environment, and access to curriculum. It recommends collaboration between special education and general education departments and addresses issues of equity. The reality of what we were living everyday with Grace is echoed in the report: “The lack of equitable access to effective inclusive options… appears to be a major systemic issue in Massachusetts.”

I was riveted by what the report referred to as “policy mechanisms” to create systemic change. I wanted to learn from Hehir how to help Grace and every student like her. I enrolled at the Ed School, where Hehir — or as most of us know him, Tom — became my adviser, teacher, colleague, and friend.

He has changed the life trajectory for my daughter and millions of children like her. As director of the Office of Special Education Programs at the U.S. Department of Education, he was responsible for implementing the Individuals with Disabilities Education Act, which serves 6 million children with disabilities across the United States. He’s consulted with and written international reports on inclusive education for countries such as Brazil and Sweden. He has authored four books and countless articles on the importance of including children with disabilities in every classroom through the use of universal design for learning and good old-fashioned best practices in education.

If you know Tom, you know his easy-to-approach persona. He started his career as a special education teacher and now considers himself a “teacher’s teacher.” For all that he has achieved, he remains a kind and generous teacher who understands the rigor involved in educating our next generation of leaders. He has also instructed thousands of Harvard graduates — teachers, principals, superintendents, and policymakers — on the importance of implementing meaningful inclusive education. At a place as focused on intellectual ability as Harvard, Tom has consistently reminded all of us that disability is natural, equity includes individuals with disabilities, and inclusion is more than an educational concept. It is a state of mind.

1990: Named associate superintendent for the Chicago Public Schools, where he was responsible for special education services and student support services. In this role, he implemented major changes in the special education service delivery system, which enabled Chicago to reach significantly higher levels of compliance with the IDEA and resulted in the eventual removal of the U.S. Department of Education's Office for Civil Rights as overseer.

1993–1999: Director of the U.S. Department of Education's Office of Special Education Programs. As director, he was responsible for federal leadership in implementing the Individuals with Disabilities Education Act (IDEA), playing a leading role in developing the Clinton administration's proposal for the 1997 reauthorization of the IDEA, 90 percent of which was adopted by Congress.

2006: Receives award from the Federation for Children with Special Needs

2010: Testifies at the U.S. House Committee on Education and Labor hearing on expanding access to quality charter schools

2011: Named the Silvana and Christopher Pascucci Professor of Practice in Learning Differences at HGSE

2011–2014: At the request of the Massachusetts Department of Elementary and Secondary Education, conducted studies into and prepared reports on special education in Massachusetts in order to better understand the "variation in identification, placement, and performance of the Commonwealth's students with disabilities."

2015–2016: Principal investigator of multi-state study of the identification and placement of low-income students in special education

Special Education at the Century's End: Evolution of Theory and Practice Since 1970 (1992)

How Did You Get Here?: Students with Disabilities and Their Journeys to Harvard (2015)

DeVos Rescinds Guidance Documents for Disabled Students: What Does It Mean?

How Did You Get Here?

Usable Knowledge: How Did They Get Here?