On Thursday May 24, HGSE diplomas and certificates were awarded to graduates in Radcliffe Yard.
By Leah Shafer
May 24, 2018 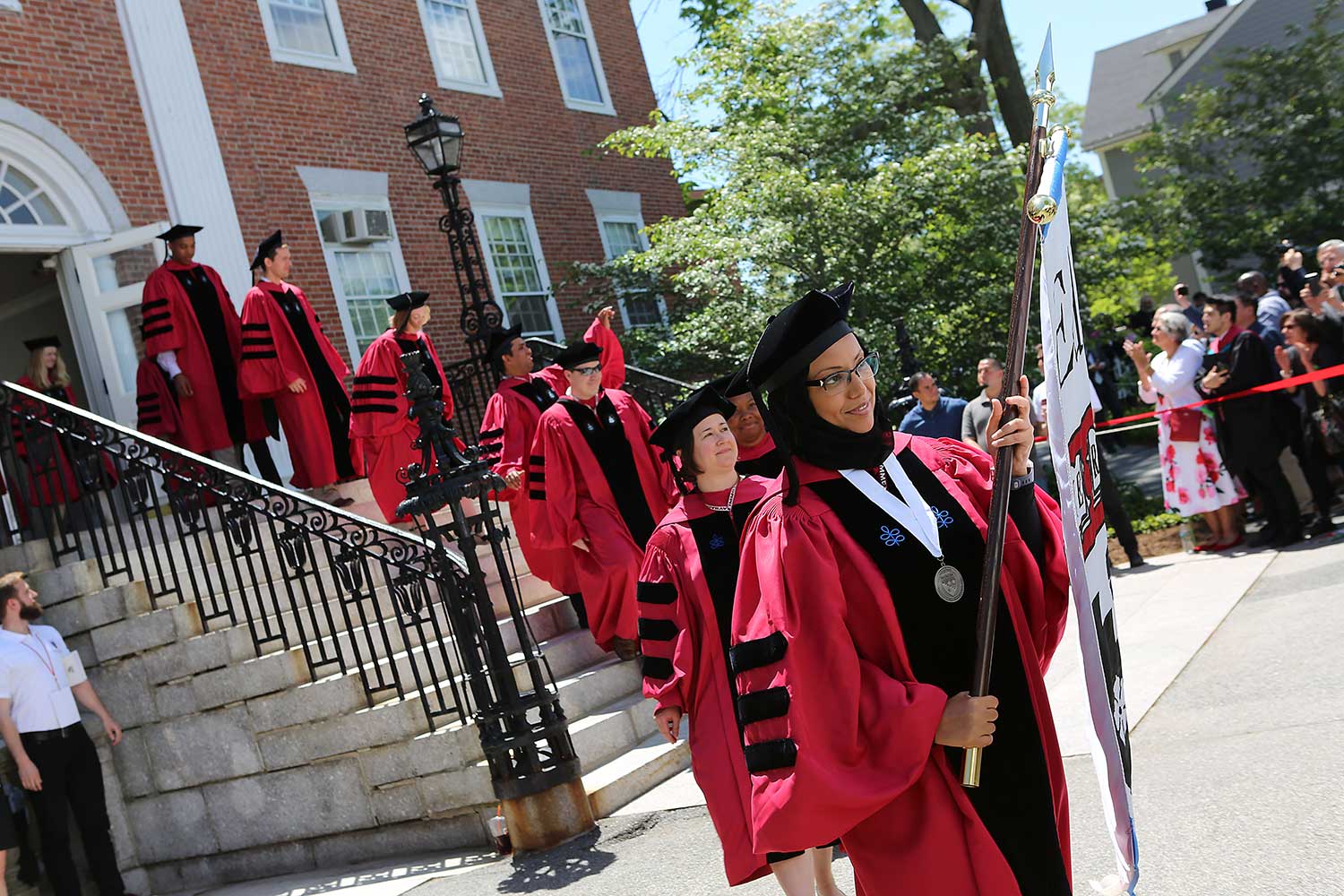 Music rang out across Radcliffe Yard today as Dean James Ryan addressed the Harvard Graduate School of Education’s graduating class with what has become his signature homage to educators.

“I believe you are the luckiest graduates of the entire university because you are going to work in education, and there is no higher calling, no more rewarding or meaningful field in which to work,” he said. “I have seen your passion, your commitment to social justice, and your enormous talents on display all year, and while I am sad to bid you farewell, I take solace in knowing that you are leaving here to make the world a better place.”

Ryan’s words prefaced a “mixtape” of songs he created for the crowd, as well as a stirring musical performance by 12 of the graduates.

First though, the cheers of families and friends surrounded these 721 new graduates as they marched through Longfellow Hall and into Radcliffe Yard. Twenty-five are from the Doctor of Education (Ed.D.) Program, 28 from the Doctor of Education Leadership (Ed.L.D.) Program, 10 from the Certificate of Advanced Study in Counseling (C.A.S.) Program, and 658 from the Master of Education (Ed.M.) Program. They leave Appian Way prepared and inspired to begin — or in many cases, continue — their work as teachers, principals, superintendents, researchers, counselors, policymakers, entrepreneurs, advocates, and changemakers.

Ryan started his speech with a special thank you to the HGSE faculty departing this year: Terry Tivnan, Kay Merseth, Kitty Boles, Helen Haste, Andres Alonso, and Steve Mahoney. He also extended appreciation toward Bridget Terry Long, the HGSE professor and renowned educational economist who will succeed Ryan as dean of the Ed School this July.

Then, placing a boombox on the podium, Ryan introduced his parting message to the students: To stay grounded. “In a world that is often uncertain and chaotic,” said Ryan, “staying grounded will help you maintain the calm strength of mind and heart to connect with and serve others, especially the students who need you the most.”

Starting with sadness (“Gabriel’s Oboe” by Ennio Morricone, featuring Yo-Yo Ma on the cello) can grow your empathy, said Ryan. When you open yourself up to sorrow in the world, you will start to think about how to alleviate that suffering. Then, he suggested, turn to joy (“This Girl is On Fire” by Alicia Keys); joy stems from love, and “love is the only force powerful enough to take on sorrow.”

A song that reminds you why you do what you do (“Read All About It” by Emili Sande) should come next. Said Ryan, “I’m in education, I do what I do, because I’m compelled by, I’m drawn to those left out, those who are different. I think of education — whether in schools around the world or right here at HGSE — as giving those forced to the margins a chance to have their voices heard.”

On the “B side,” Ryan played a rebellion song (“Wild Things” by Alessia Cara), to inspire you to speak up when things feel wrong. He then shared a friendship song (“Stand By Me” by Ben. E. King), saying that an effective way to remain grounded is to have rock solid friends. (Here, after the clip of the song had ended, the graduates spontaneously continued singing the chorus.)

Finally, said Ryan, “you need a goodbye song, because life, for better or worse, is one long series of goodbyes.” Citing “Nobody Knows How to Say Goodbye” by The Lumineers, he explained that a physical departure is not necessarily a spiritual one, that love outlasts the act of saying goodbye, and that meeting again remains a mystery. “Love is deep as the road is long,” quoted Ryan.

“If you ready we can save the world

We don’t have to wait for destiny

We should be the change that we want to see

If you’re out there.”