When Opportunity Hits You in the Face 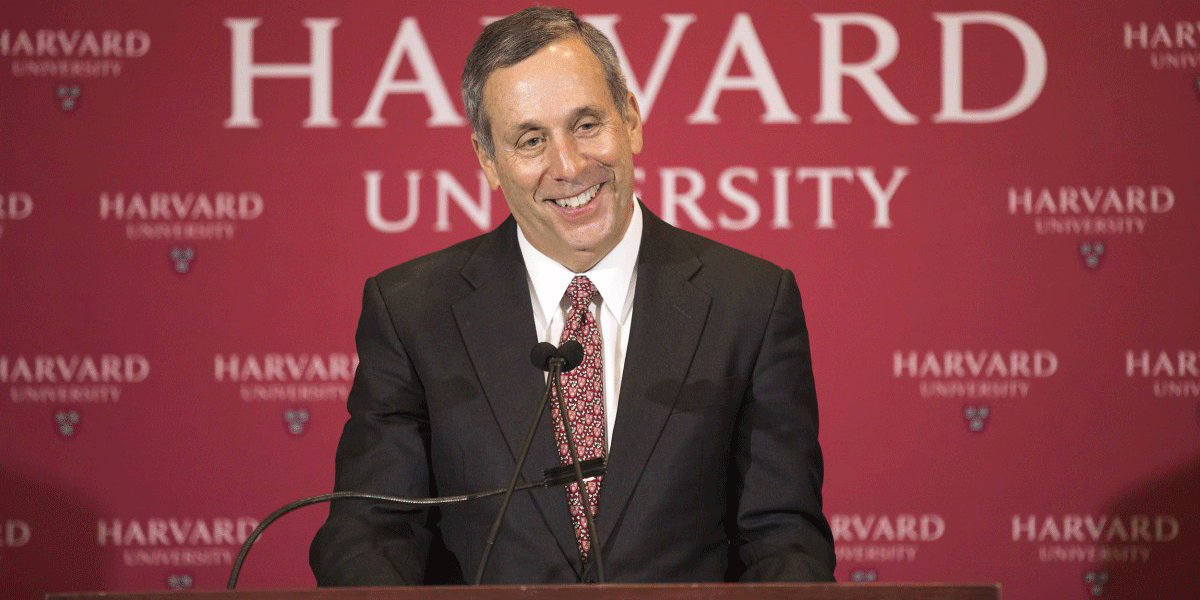 Last week, Harvard University announced the appointment of its 29th president, Lawrence Bacow. We talked to Harvard Graduate School of Education senior lecturer and chair of the Harvard Seminar for New Presidents, Judith Block McLaughlin, who has known Bacow since he was chancellor at Massachusetts Institute of Technology (MIT), about his appointment, his time as president-in-residence at HGSE, and the challenges facing university presidents today.

What was your reaction when you heard the news about Bacow’s appointment?

When I heard about Larry’s appointment, I emailed a close friend of mine and Larry’s with the single word, “Wow!” And then my inbox started filling up with emails from Larry’s former students, colleagues and friends, many of them also starting with the word “wow,” or in one case, “wow, wow, wow.” I think there are two reasons that was the word of the moment: It was both, “Wow, we hadn’t seen that coming” — the appointment was unexpected — and, also, “Wow, what a superb choice.”

When he was at HGSE [as president-in-residence from 2011–14], Larry regularly advised students that the best careers are often unplanned. As he put it, they needed to “recognize opportunity when it walks up and hits them in the face.” That’s also how he’s described his own career. When he became chairman of the MIT faculty, when he became chancellor of MIT, and when he was asked to become president of Tufts, these jobs were not on his professional “to do” list. In every setting in which Larry has worked, he has been recognized for his outstanding intellectual, professional, and human qualities. It’s not surprising that he was asked to lead the faculty at MIT, or that Tufts saw great potential in him to be their president, or that the Harvard search committee realized that they had the right person in their own midst to be the next president of Harvard.

Larry was leading a pleasurable and productive life post-presidency: He wasn’t looking to be a president again. When the announcement appeared in my inbox, after I thought, “wow,” I realized that opportunity had certainly hit Larry in the face again. How wonderful for Harvard that he recognized it and accepted it.

Can you share a bit more about the president-in-residence program that Bacow participated in? What impact do you think it has on leaders and what do they take away from the experience?

The president-in-residence takes part in classes and talks informally with students about higher education issues and career opportunities. As Larry himself sometimes described it, the president-in-residence program provides a soft landing for former presidents. It’s an opportunity for them to draw on their experience to educate future higher ed leaders, and to become part of another vibrant campus community — one, I should add, for which they have no direct responsibility. So they can have all the enjoyment of campus life with none of the headaches!

Typically, we have a president-in-residence — usually one at a time — for about a year, but because Larry joined the Harvard Corporation shortly after he signed on with us, we were able to persuade him to stay with us for three years. And we knew how lucky we were to have him. He was wonderfully generous with his time, co-teaching with me and serving formally as an adviser to master’s degree students while also informally advising many of us — faculty and administrators alike.

Larry also taught presidents, vice presidents, deans, and librarians in our executive education programs, who in their program evaluations described Larry as an inspirational role model: a wise and compassionate leader who deftly combined a facility with — and delight in — data and metrics with deep emotional intelligence and caring.

At HGSE, we love the fact that Larry had this chance to experience the quality of our students and to participate with us in making an impact through education. We’re happy the Ed School, as his former home base, is one more part of the university he knows well as he takes on this new role at Harvard.

This is a very important time for Larry to be assuming the presidency of Harvard. The value of higher education is being questioned more forcefully than ever before, with fierce attacks on what we do, how we do it, and why we do it. Higher education needs leaders who can defend and explain the academy, while also listening and taking seriously the valid criticisms of it and finding new ways to address them.

As the leader of the most visible university in the world, Harvard’s president has a special obligation in this regard. And Larry is the right person to make the case for higher education externally and to improve and enhance this university internally. As evident from all the wonderful and well deserved tributes to him since Harvard’s announcement last weekend, Larry is held in extraordinarily high regard.

But what might not be so evident, since understandably many of the people quoted know him from Harvard, Tufts, and MIT, is that Larry’s many years teaching in our executive education programs have introduced him to the leaders of private and public institutions, large and small, independent and church-related, those internationally acclaimed and those only locally known and loved. Larry understands and appreciates the broad array of institutions that comprise the landscape of higher education, is well poised to speak knowledgeably on behalf of them, and will be trusted and believed when he does.

At HGSE, you lead a seminar for new presidents (and experienced ones). Bacow is in some ways both — an experienced president, having served at Tufts University previously, and a new president at Harvard. Do you have some pieces of advice for him as he embarks on this new role?

Yes, Larry is both new and experienced. From his tenure at Tufts, he knows the demands of the presidency, knows what it is like to be the living logo of an institution. And he also knows Harvard well as a member of the Corporation and an alumnus. He brings remarkable experience and knowledge to his new job. But he has never been president of Harvard, and although there will be undoubtedly many ways that the issues he faces will feel familiar to him, Larry’s far too smart to think that what he knows from Tufts or MIT will necessarily apply here.

I am sure that in his first months, he will do here what he did when he started at Tufts: listen and learn carefully and thoughtfully, find trusted advisers, identify priorities, and build relationships. In other words, he’ll be doing what he’s done before that made him successful and what he’s told new presidents over the years to do: “operate in full sponge mode.”