Professor Bridget Terry Long breaks down what "free" community college really looks like — to both students and schools.
By Matt Weber
February 22, 2018 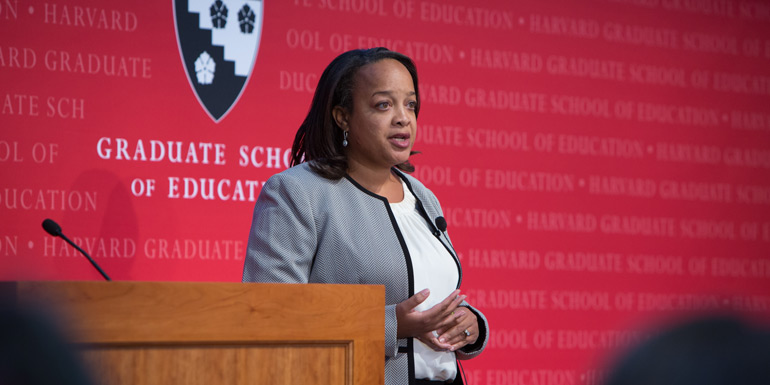 Community colleges are the "backbone of the higher education system," says Professor Bridget Terry Long, an educator and economist, whose work focuses on the transition from high school to higher education and beyond. Over 42 percent of college students — including many students of color, older students, and people seeking continuing education — attend community colleges in the United States, says Long, and many of that number experience challenges in paying their tuition. Programs such as the Obama administration's American College Promise, which offers two years of free tuition to responsible students, are trying to address that problem, but, according to Long, they don't get us all the way there.

"Free college might solve some problems like affordability, but we know [for] many students … the main cost they are facing is not tuition, it's how do they support themselves," she says, noting living costs such as room and board, transportation, and child care. "We have to think about meeting students where they are. Free tuition might do some things, but it's not going to do everything."

Also problematic is that these programs do not have long-term fiscal feasibility for the schools or the states that have attempted to put them into practice. The demand is too high and the budgets are stretched too thin.

"We need to go deeper," says Long, suggesting that students would be willing to pay for tuition if they felt that they were getting what they need from their education.

In this edition of the Harvard EdCast, Long, moderator of last month's Askwith Debate on the topic of free college, discusses both sides of the issue and looks at what educators and policymakers can do to get closer to a solution.