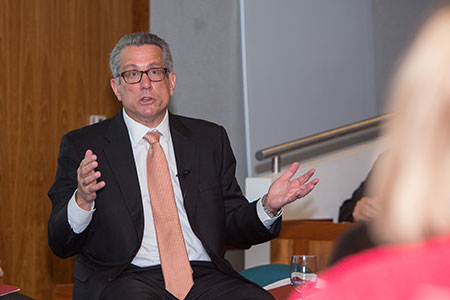 The Harvard Graduate School of Education is remembering Mitchell Chester, Ed.M.’88, Ed.D.’91, commissioner of education in Massachusetts, and one of the longest-serving education commissioners in the nation, according to The Boston Globe.

"I was incredibly saddened to hear of Mitchell Chester's passing,” said Dean James Ryan. “Mitchell was a phenomenal leader who possessed an unyielding commitment to improving the lives of children and young people in the Commonwealth. On behalf of the entire HGSE community, I would like to share my condolences with his family and friends and express my deep appreciation once more for his service. The legacy Mitchell leaves behind is something to which all educators aspire."

When Chester took up his role as commission of elementary and secondary education in 2008, he may have seemed like somewhat of an “outsider” in Massachusetts, coming from Ohio, with an impressive track record, where he worked as senior associate state superintendent for the Department of Education and oversaw standards, assessments, accountability, policy development, and strategic planning for the state. But Chester, earlier in his career and after working as a teacher, completed his doctoral work at HGSE, and at the time of his appointment, considered it an “added bonus” that he was able to return to the state where he completed his dissertation work.

“Mitchell’s death is a devastating loss for both his family and the Commonwealth. He was a powerful contributor to Massachusetts’ preeminent education achievements and a highly respected leader among chief state school officers nationally,” said Professor Paul Reville, former Massachusetts Secretary of Education, noting Chester’s impressive ability to find constructive middle ground on tough issues in the Commonwealth, such as the controversy over assessment tests PARRC and MCAS. “Mitchell was a rock-solid, centered leader with a great gyroscope that kept him balanced, yet relentlessly focused on equity, evidence of what’s best for children and the pursuit of a path with integrity. I will miss my friend and colleague.”

In his time as commissioner, Chester notably headed up the state’s Race to the Top efforts, designed radically new approaches to school turnaround work in places like Lawrence and Springfield, and navigated the Commonwealth’s K-12 sector through challenges like the Great Recession and the Common Core debate. He also is credited with professionalizing the Department of Elementary and Secondary Education, moving it, says Reville, to be much more of a service than a compliance agency and attracting some top talent to the agency including a number of HGSE grads.

“I had the pleasure of collaborating with Mitchell since 2010, when we came together around the problem of early literacy rates in the Commonwealth. As a policymaker, he had a deep appreciation for the science and the complexities of advancing teaching and learning, and he was respected by everyone around the table for this deliberate approach,” said Professor Nonie Lesaux, chair of the Commonwealth’s Board of Early Education and Care. “But above all, I came to know him as someone guided by a deep belief in high-quality education for every learner, and a commitment to getting it right for the state's readers. And during regular conversations around this relentless pursuit of better outcomes, we talked of the kids in our own lives and communities — as friends and colleagues.”

Colleagues who worked with Chester described him as generous, curious, a lifelong learner and leader, and a dedicated advocate for public schools and a strong educational experience for all students.

“I appreciated [Mitchell’s] interest in lessons that could be learned from other countries and jurisdictions, and his generosity in always finding time to speak to various education delegations from other countries that visited Massachusetts to learn about the State’s efforts to improve our public schools,” said Professor Fernando Reimers in a remembrance piece. “In that simple act of kindness, our commissioner demonstrated a form of global citizenship and an understanding that the advancement of public education is a shared enterprise that can bring humanity together.”

When speaking to HGSE in 2008 upon his appointment as commissioner, Chester quoted a proverb that is worth revisiting today as the community recognizes and remembers his years of service and broad impact: “If you want to go fast, go alone, and if you want to go far, go together.”