Armed with a Ph.D. in physics and a strong sense of what he feels is right, the Teacher Ed alum has become a fierce advocate for the high-needs students in his New Jersey high school.
By Bobby Dorigo Jones
May 1, 2017 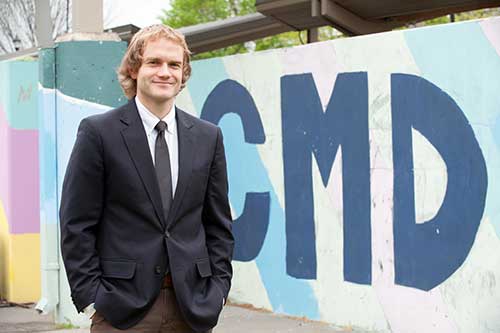 Scott Bustabad, Ed.M.’15, knows that in order to drive change for students — especially those with high needs — sometimes teachers have to innovate and sometimes they have to agitate.

While working on his Ph.D. in physics at Michigan State University (MSU) in 2013, Bustabad was moved to act when he learned that the struggling Detroit Public Schools were cutting some science programs. “I am at one of the best physics labs in the country and we’re down the street,” he says. “I was in a position to help, and I had to help.”

Bustabad worked with the district to organize physics programs that brought students to the world-class MSU physics lab. Suddenly, Bustabad found himself in a new role in the classroom, one for which he didn’t feel quite prepared. “I pulled an all-nighter before my first class, I was so nervous,” says Bustabad, who had never taught a class before then. “But, on my first question – ‘What are the three things that make up an atom?’ – literally half the class shot their hands up. As soon as that happened, all the anxiety went down.”

Inspired, he enrolled in HGSE after completing his Ph.D., targeting the Teacher Education Program for its focus on urban education. “It’s not what my [Ph.D.] classmates usually do,” he says, laughing. “I’ve known for some time I wanted to teach, but being in Detroit confirmed that I wanted to work in urban schools.”

Bustabad is grateful for how his time at the Ed School prepared him for teaching. He is particularly thankful for the three consecutive summers that he spent at the Cambridge Harvard Summer Academy (CHSA), a partnership between HGSE, Cambridge Public Schools, and Cristo Rey Boston that allows TEP students to practice with mentor teachers over the summer break. There, he was given the space to innovate and modeled his physics class after the lab in which he had worked in Detroit. He also was able to invite several Nobel Prize-winning scientists to meet with students.

“They just hung out with kids, told stories, just rich stuff that you can’t put in a textbook,” he says. “At CHSA, you can totally experiment and try out new things. You can make classes that are really cool and that connect with students. You are not limited by anything.”

Hoping to continue serving students in disadvantaged districts, Bustabad moved to Camden, New Jersey, a district that lacked the resources of a Harvard partnership school. “I knew the district had very few physics teachers, and if I’m not here, the kids wouldn’t have a qualified physics teacher. That was really important,” he says.

One day, when he was working to help one of his students figure out a mixed-up schedule, Bustabad discovered that the special education students at his high school were clustered together during the same period — even though they were studying different subjects — and they were struggling to fully learn the material.

“The teachers were responsible for teaching different [subjects] at the same period. Three of them. Physics, biology, and chemistry or geometry, algebra I, and algebra II during the same class — and all these students were special education students,” says Bustabad, noting that while the teachers worked valiantly, they were not certified to teach all the subjects that they were being asked to in those mixed classes. “They had to be more than superheroes,” he says.

Appalled by the discovery, Bustabad brought this up to anyone who would listen, from fellow teachers to district leaders. Fed up with the lack of response to the problem, he emailed the office of New Jersey Governor Chris Christie. “I thought I might lose my job. I thought I would just receive a form email,” he says, but the reply contained assurance from the governor’s office that the problem would be solved.

Buoyed by the support of the governor’s office, “one, maybe two days after I got that reply, I was back in a room with district leaders working on solutions,” he says. “Special ed now is clearly the best it’s ever been in Camden. We are making progress. The district has totally changed its policy” and has lightened the load of special education teachers and worked to integrate students with special needs in all classrooms.

“When you teach, when you’re in education, there’s going to be stuff that comes on your radar that you do not expect [and] that’s not really your job,” Bustabad says. “I don’t want people to turn a blind eye on kids just because something is not their immediate responsibility. We all need to think about what’s best for our kids.”