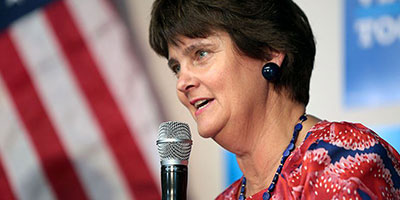 What will public education look like in the United States in the near future? Former Virginia Secretary of Education Anne Holton — lawyer, judge, onetime First Lady of Virginia, and longtime advocate for children and families — knows that the current political climate has left the fate of the institution uncertain at best.

"I'm concerned that there is a mood that's questioning the fundamentals of public education," says Holton, at the Ed School for a conference on Women in Leadership. "And, while I think there is strong support in our communities for both folks' local schools and the concept of public education, I worry about it." Especially, she says, whether teachers will have the resources they need to be able to serve their students, particularly in schools in which poverty is an issue.

Despite this, Holton is encouraged by innovation and the creativity that she sees in schools and districts across the country, as well as by the teachers who are sticking it out in difficult circumstances.

"I think we actually do get a lot right," she says.

In this edition of the Harvard EdCast, Holton discusses her life as a public education advocate, why we need to continue to support women as leaders, and her continued service to Virginia, now as an education board member.