With her new program, Nina Sokolovic, Ed.M.'16, aims to provide parents in rural Serbia with the information and strategies necessary to care better for both their children and themselves.
By Jill Anderson
January 24, 2017 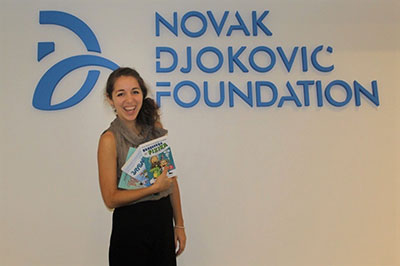 As Nina Sokolovic, Ed.M.’16, finished her project this past spring for the HGSE course, Risk and Resilience in Social Contexts from Birth to Young Adulthood, she never imagined the report detailing child health and development in Serbia would lead to an opportunity to develop a pilot program in the country. But that is exactly what happened this fall when the Novak Djokovic Foundation — a nonprofit founded by the tennis player and his wife, Jelena, that invests in early childhood education and family support programs throughout Serbia — hired Sokolovic to do so.

“When I sent the report to the Foundation, I was expecting they might have questions or want to use the research, but when they offered me a job and the resources to develop the pilot program — that was a dream come true,” says Sokolovic, a Prevention Science and Practice grad, whose parents immigrated to Canada from Serbia just before she was born.

Sokolovic became familiar with the foundation after spending a year living in Serbia on a Fulbright fellowship researching breastfeeding. Sokolovic saw a great need to provide Serbian parents, particularly those living in rural areas, with more information about child development and health. This belief inspired the HGSE project that would become the pilot program, Podrska ne Perfekcija — which translates to “support, not perfection” — a 10-week relationship- and strength-based workshop for parents in rural Serbia that teaches about child development and positive discipline strategies, and helps build a social support network.

“Only one in four children in rural regions have access to formal early childhood education, and their parents’ ability to provide them with the types of experiences that promote positive development is severely limited by challenges that include poverty, social isolation, and inadequate resources,” Sokolovic says. As a result, these children social-emotional skills and academics often are behind their urban peers at the start of elementary school.

Podrska ne Perfekcija aims to develop parents’ toolkits with knowledge, strategies, and support they can draw on to make it easier to take care of their children and themselves. “Since most children spend the bulk of their time at home, I decided that creating a program focused on the home environment would be a promising investment,” she says.

As a Harvard College undergrad, Sokolovic, who concentrated in neurobiology, found herself spending time at the Ed School, inspired by the work of Professor Jack Shonkoff and the Center on the Developing Child, and later she enrolled in Senior Lecturer Katherine Merseth’s popular undergraduate course, Equity and Excellence in Education. When it came time to attend graduate school, Sokolovic was drawn to PSP as a means to learn more about children’s cognitive, social, emotional, and physical growth and well-being.

Not only did Podrska ne Perfekcija begin in Risk and Resilience in Social Contexts, but Sokolovic has also taken methods about program design and implementation learned in the course and applied them to the development of her program. Sokolovic is putting the finishing touches on the manual for Podrska ne Perfekcija, and will now focus on recruiting and training facilitators to be ready to launch the program in early 2017.

“What I am most interested in is to see whether the program succeeds in building a community and support network among parents,” Sokolovic says. “There are many aspects of the program meant to promote this outcome … but whether parents capitalize on these opportunities and connect with each other beyond the scope of the program — that’s something I can’t predict but something that could be the key to sustaining a longer-term impact.

“Getting to spend each day believing in the dreams of children and families in Serbia,” Sokolovic says, “and dedicating myself to creating the best possible program to help those dreams flourish, is a true privilege.”