Astronauts inspired educators and students to explore the unknown, gave a reason to study math and science that was bigger than themselves.
By Casey Bayer
December 9, 2016 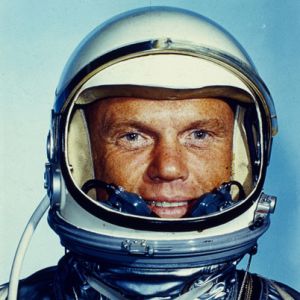 On Thursday, senator and first American man to orbit Earth, John Glenn, died at the age of 95. An American hero and pioneer, Glenn inspired future generations of scientists and explorers. We talked to Professor Nancy Hill about Glenn’s legacy, its impact on STEM education, and how he encouraged young students to innovate and explore new, undiscovered frontiers in the world.

Growing up in the age of the developing space program, did you feel a personal connection to the early astronauts and specifically John Glenn?

I am originally from Ohio, as were astronauts Neil Armstrong and John Glenn, and we saw them as really one of our own. When I was growing up, John Glenn was our senator, and he was an inspiration to my family and I — that not only was this person a heroic astronaut but also public official and public servant.

I was the youngest of eight in my family, and my father’s first job was building airplanes at the Wright-Patterson Airforce base — yes, Wright as in the Wright brothers. Although it ultimately wasn’t his career, it impacted how he thought about math and science. The science of flight, aeronautics, and engineering were talked about frequently in our house. It was part of the water we drank, and the air we breathe. No matter what we did, my parents insisted on math and science. Glenn exemplified that math and science, and flight, were the core of what we believed in — particularly as Ohioans.

What did the early astronauts do for science and math education in our country?

What it did for our country was it gave us a purpose, a common purpose and goal that could not be reached by one person alone. When we were imagining these things that no one had ever done — going to the moon with in the decade — it gave us a reason to study math and science that was bigger than any individual career.

Everyone needed to be their best selves if we were going to do this together. And this was an incredible unifier for our nation – to do something unimaginable that was both scientific and theological and philosophical all at the same time – that we were going to touch the sky as one. And this was happening for us as a country when there was tremendous racial and political divisions and conflict. It was a positive focus in a time of national strife.

In my research with my colleagues, we have found that, for adolescents, a sense of purpose is paramount. They know all the right answers; when you ask them if they want to go to college, they say yes, and when you ask them what they want to be, more often than not, they know to provide career choice that is dependent on a college degree. But when you ask them what gives their life meaning, and how they attach that meaning and purpose to what they are studying, that is when they light up. And that is what the space program did for many young students. They studied math and science not just because they were supposed to, but because it was attached to something that was exciting and for a greater purpose.

When it comes to new innovations and new frontiers that are so new there’s not really a curriculum for them, how do we prepare the next generation?

What is interesting about the early astronauts like John Glenn, was that it could have been anybody. When you consider his background – from rural Ohio, middle class, attended public school, joined the armed services as many did in that day – you had the sense that anyone could have done it. That is less the case today.

Today, the vast inequities in our educational system keep whole demographic groups of students from reaching their potential, particularly in math and science fields. Anybody should be able to get ahead and do something amazing, not because of where they were born or what the circumstances of their childhood were, but because of who they are. We have the tools to succeed, and we know how to do it, but where we suffer is in that there are students in schools that aren’t exposed to math and science, [who] don’t have lab spaces or enough reading materials. Many of these are low income and underrepresented minorities that also face high teacher turnover and schools that are under-resourced.

As educators, we must remember that anyone in our classrooms is capable of doing amazing things, limited only by their imagination. It is important to see the potential and capacity in the individuals sitting in front of us; we don’t know who is going to be the next John Glenn. If we can better inspire and support our teachers, they can in turn be better at helping students discover their purpose, something linked to the greater good of society that links up with what makes a student light up. When John Glenn and others were breaking barriers and entering new frontiers, teachers and students were watching together on TV — they both were in awe and inspired together. Education today is to supposed to ignite the passions and possibilities in students. While we need to make sure that is in the forefront of our minds, it is also a call for school reform to ensure that all students have the possibility and potential we saw when we looked at John Glenn.

Who are the “astronauts” for today’s youth? What are the areas with potential to inspire like the space program did?

The space program captured the entire nation, no matter what you did. Today, the real frontiers are in still the sciences, but it may look a little different — and not just because our space program as we know it has been under threat for over the past decade. We’re not envisioning flying cars, or vacations on Mars as much as we were in the 1960s and 1970s.

But there is still a way to capture the inspiration of a generation by addressing global issues and problems, like climate change and energy efficiency, and unifying by our humanity. And we will still have space exploration, as we’ve seen big gains and discoveries on Mars, but it is not on the front pages like it was in Glenn’s era. I see this likely happening in the fields of genetics, robotics, climate change, and energy.

Beyond a specific field or area of study, where teachers can really open the doors for students and cultivate their inspiration is simple: Allow students to create and solve. Teachers provide the building blocks, principles, and tenets for understanding and knowledge, but students need space to create and solve new problems. These may even be unique problems that neither teachers nor students even know the answer to yet. By creating and solving, they are learning the practice of discovering the things they didn’t know, and are then able to use the knowledge and skills to find and answer new questions. So Your Student Believes the Earth Is Flat Let’s Not All Make the Same Thing

How to support self-directed projects in the classroom.