Birth of a Super School: The Plan 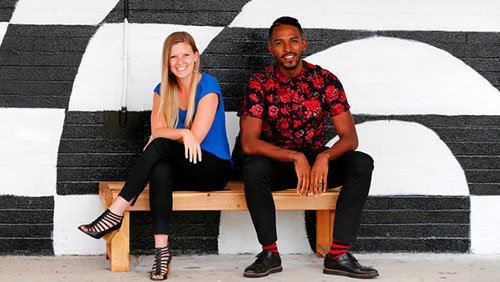 In the fall of 2017, Kari Croft, Ed.M.’15, along with fellow Los Angeles teacher Erin Whalen, will make a dream a reality when they launch RISE High — an innovative high school aimed at serving the unique needs of homeless and foster youth in Los Angeles.

Among the 700 applications, RISE High’s model, which focuses on ensuring that transient students can receive steady access to quality education tied to wraparound services, rose to the top. “As much as I believed in it, I didn’t know if we would get the grant,” Croft says, noting that she planned to pursue the creation of the school regardless of the XQ results. “We were very surprised and overwhelmed to find out we were one of the 10 schools. This is something I care a lot about, whether awarded a final prize or not.”

Working with a team comprising 26 educators, industry experts, nonprofit service providers, and students, Croft will spend the next year building out the unique model, which will feature multiple sites and a mobile learning center equipped with items such as hygiene products and cell phone chargers.

While in the School Leadership Program at HGSE, the former high school teacher — who has taught in Los Angeles and her home state of South Carolina — took advantage of the school design strand. “I really wanted to learn more about what it took to open a school,” Croft says. And, now, she’s living it.

Croft spoke to HGSE recently about the school and upcoming steps to open RISE.

Did you consider opening a school while working as a teacher?
I was noticing that even when I was really focusing on my classroom and working really hard alongside students that there were still so many things I didn’t have control over. There were many external factors impacting students. I could have a really great classroom and then something could happen while the student walked to their next class. I would not see them for a week because they'd been suspended for a behavioral issue or because their parents had to move across town to find shelter. Leading a school is difficult work, but I saw a need and heard my students expressing a need for a school that looked different. It was obvious that some of the systems in place were not working for all the students.

When did you first conceptualize RISE High?
While at HGSE [2014–2015], I had some idea but it was still very vague. My classmates and faculty pushed the idea. Senior Lecturer Kay Merseth pushed me to think in her Equity in Education course. For the final, she let me produce a charter petition, which gave me some opportunity to flush out what this school could look like. When I got back to Los Angeles, I shared some of the ideas with the Da Vinci Schools’ Executive Director Matt Wunder. The visions that we had for what school could look like and how it could work better for students converged. I joined Da Vinci as a fellow in the 2015–2016 school year to learn as much as I could from the best practices that had proven so successful for their students. Our team used those practices as a starting point in thinking about what a really engaging and rigorous academic experience could look like for students. The adaptations and tweaks we made are ultimately what we submitted for the RISE XQ Application.

With so many students in need, why did you choose to focus on the homeless population?
When I started working in the classroom, I began seeing the different experiences students were having. Our societal idea of what homeless means is not always what students face. They may be living out of hotels due to losing housing or not able to afford rent, or perhaps doubled up living with another family. Then, there are huge numbers of students [in Los Angeles] being pushed out of their homes or who have left home due to their sexual orientation. Some students are sleeping on someone else’s couch. At the same time, I found out through spending time with students that there is a huge overlap of housing instability for students transitioning in and out of the foster community. At 18, students transfer out of the foster system. When I started working with students facing these situations, with so many immediate needs not being met, I believed if I could work with these students, bring them to one place, and give them access to a schedule that works for them, that it would make a difference.

A lot goes into designing and opening a new school. What are some upcoming tasks you are working on?
There are several items we are currently focusing on. First, working on the charter petition, which is a document you have to submit to the district for approval so we can open next fall. In the application we submitted to XQ it contained a lot of information that carried over, but basically the petition describes in detail what the school will look like from instruction to school leadership to legal compliance to how we serve children with special needs or English-language learners, behavioral supports. Basically, this provides a full picture of what the school will look like in action even down to how we’ll engage with parents and the community. We are working to complete this and submit as soon as possible.

We are also working to build out staffing structure and plans so we can begin recruiting for next year. We are aiming to start recruiting at the end of the semester. Also right now is a focus on curriculum development. Da Vinci Schools has provided a strong starting point, which we are adapting to fit the needs of our students and model. Another ongoing activity is working with partnerships to further design what the school and wraparound services will look like on site. This includes meeting with partners over the next few weeks to clearly determine the design.

In addition to these major efforts, we are also running a pilot program currently with 25 students, and making sure they receive a great experience and strong program.

Any setbacks yet?
We have such an incredible support network around us right now that is making it harder for us to have those setbacks. XQ has certainly helped because the financial pieces are less of burden for us now. But it is a learning curve for me to make sure I’m keeping up with everyone around me, and making the best decisions for students. It’s going really well so far.

HGSE will follow Croft in the upcoming year through the opening of her school, checking back in to understand what it takes to open a new school.