Up Next: Dimensions Family School 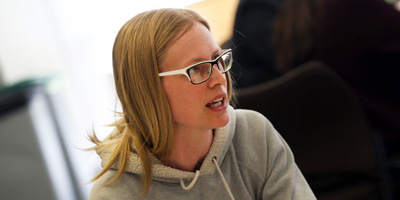 When Charlotte Dungan, Ed.M.’16, and her family moved to Durham, North Carolina, she was faced with the task of selecting a new school for her daughter. In Ohio, Dungan’s daughter had been enrolled at the alternative school at which she had taught, but, having moved in the middle of the school year, there was little time to do research into the options in their new city. So, Dungan decided on what seemed like an ideal solution considering her teaching background: homeschooling.

As time went on, what Dungan had seen as a temporary arrangement turned into anything but. With the aid of community enrichment programs — which provided friends and support — that one year has turned into eight. “I just kept doing it,” Dungan says.

Now, after completing her master’s in learning and teaching, the recent Ed School alum is preparing to open Dimensions Family School, a nonprofit organization that provides homeschoolers — both students and educators — with support in numerous areas, including electives, extracurricular activities, professional development, facilities, and community-building.

“We can give a locker, prom experience, arts and crafts, or fitness,” Dungan says, citing just a few of the traditional school experiences and electives that Dimensions will help to provide. “We also support parent educators with professional development. We can train homeschoolers and give support to be better educators as well.”

The idea for the school came to Dungan when things became more complicated in her own experience as a homeschooler. With four children — one each in high school, middle school, elementary school, and preschool — she struggled to get them to all of their various activities while also attending to the different study levels.

“I couldn’t figure out how to drive them all around and do all of the different things necessary,” Dungan says. She began to think about how she could be more efficient, talking to fellow homeschooling educators about ways to do it better.

“There are unique challenges to homeschooling, just like there are to public school,” she says. “There are logistical challenges like how to get one child to basketball while the other child is taking Spanish. Plus, teacher education is huge, as teacher training isn’t offered to homeschooling parents. Additionally, homeschoolers are looking for authentic relationships where they know each other and their children, and can support each other in meaningful ways.”

With homeschooling families in North Carolina currently outnumbering families who enroll children in private school, it seemed like the perfect time to create the school. Dungan soon envisioned a community organization that offered some of the structures and supports of traditional schooling with the flexibility of homeschooling.

Dungan worked on Dimensions throughout her year at HGSE, taking coursework that directly aligned with its development. “I took [Senior] Lecturer Jim Honan’s Managing Financial Resources in Nonprofit Organizations and could directly tie coursework to what I was doing,” she says. “Dimensions had a board meeting in October and I couldn’t bring the budget because that was what we were doing in the next week of class. So I sent it after. I could read a case and literally apply what I was doing.”

Dimensions Family School, which opens this September, offers Durham homeschooling families a chance to join a community of like-minded educators and gain access to classes, events, and activities all under one roof. “It works like the YMCA,” Dungan says. With a membership fee of $80 per family, homeschooling families can use the facility in multiple ways. The school offers meeting spaces, such as a large gathering space, classrooms, and rooms for clubs. Programming is also offered, some with paid instructors, but members must also volunteer to spend hours in the classroom.

The community piece of Dimensions is vital, says Dungan, especially for families just starting out. “There is a misconception that homeschoolers are fundamentally religious and interested in sheltering their children from the world,” Dungan says. “But it’s a much more diverse population than you’d imagine, consisting of all different incomes, peoples, trades, political beliefs. It’s not a homogenous community. The only thing homeschoolers have in common is they are extremely family-oriented and will sacrifice a lot to do homeschooling.”