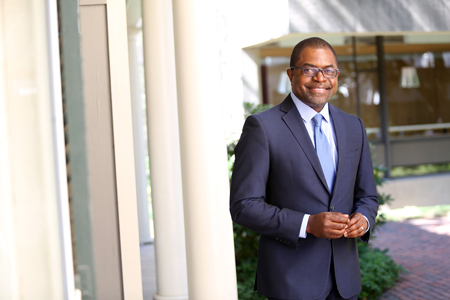 Senior Lecturer Irvin Scott, Ed.D.’11, comes to HGSE having both the perspective of practitioner and philanthropist.

Before serving five years as the deputy director for K–12 education at the Bill and Melinda Gates Foundation, where he led the investment of $300 million in initiatives focused on transforming how teachers are recruited, developed, and rewarded, he spent over 20 years working in the “trenches” as a teacher, principal, assistant superintendent, and chief academic officer. Now, Scott is excited about returning to his work teaching at HGSE in the School Leadership Program and Doctor of Education Leadership Program. “Both programs are producing amazing leaders who are doing great things on behalf of children throughout the country,” he says.

How did your work at the Gates Foundation inform what you’ll teach HGSE students?

My time at the Foundation will influence both what I teach as well as how I teach. In terms of what I teach, I think there are issues, topics, and approaches impacting educational leadership which I gained a new perspective of at the Foundation. One example is the role policy plays in what happens in the classroom, schools, and districts. I was at the Foundation when two major reforms were sweeping the national landscape: the Teacher Effectiveness and Common Core State Standards movements. I have learned so much from those experiences, and I am anxious to share with aspiring leaders who will be at the forefront of future policy shifts.

One big lesson? Policy is a blunt instrument for impacting the instructional core in the classroom. That’s not to suggest policy is not important; it’s very important. However, instituting the “right” policy — which you trust is based on a sound theory of action for accelerating equitable educational opportunities for all students — is analogous to successfully running the first five yards of a marathon. Another lesson from the Foundation is the role that innovation and entrepreneurship are playing in changing the preK–16 education landscape. Technology in combination with an infusion of entrepreneurial spirit has prompted educators to go from observers to solution drivers and designers. It’s actually quite exhilarating. When you think about it, it’s sort of ironic. Many have bemoaned the top-down infusion of federal policies like the Common Core and Teacher Effectiveness, but both those policies have ignited a firestorm of grassroots innovations educators in the trenches find to be relevant and timely.

My work at the Foundation will also impact how I teach. I plan to teach with a sense of urgency. In my job at the Foundation I was blessed to be in schools and districts, literally from coast to coast. And what I saw was hard working, dedicated educators working to transform lives. At the same time, I see data like the most recent NAEP data which show racial disparities which should burden a nation. When I look at those disparities in conjunction with reading Ta-Nehisi Coates’ Between the World and Me, it’s not hard to have a sense of urgency about this work. At the Foundation we called it “impatient optimism.”

Why did you decide to join HGSE now?

I came to the Foundation to lead the Intensive Partnership Sites (IPS) portfolio. This announcement provides a snapshot of what this effort was seeking to do. This effort also included partnering with Professor Tom Kane, who spearheaded the Measures of Effective Teaching study.

Also, there’s a lot of travel involved in being a deputy director who lives on the East Coast, while the headquarters is located on the West Coast. I must also say that while the IPS investment came to a close this year, the work of learning from these investments and building off what has been learned is ramping up in significant ways.

Why are you so passionate about teaching?

This is a story that I love to share. I was in ninth grade — nearly 30 years ago — when a teacher changed my life by building a bridge to a road less traveled.

The Year: 1981
The School: Central Jr. High School
The Location: Chambersburg, Pennsylvania
The Teacher: Ms. Scritchfield, ninth-grade English Teacher
The Story: One day Ms. Scritchfield opened up the class by telling us that over the next few weeks we would be studying poetry. I do not remember anyone jumping for joy after this announcement, but I do remember what followed this initial proclamation. She went on to say that each of us would be responsible for analyzing, memorizing and reciting — in front of the entire class — a specific poem: “The Road Not Taken,” by Robert Frost. It was that last part  —  the part about reciting for the rest of the class  —  that I had a serious problem with.

In ninth grade, I was passionate about pretty much one thing. Guess what? No, not girls! Like so many African American males then and now, I dreamt of one day being a pro athlete. To be more specific, I dreamt of one day being the next Tony Dorsett, running back for the Dallas Cowboys. So, when I heard this assignment  —  reciting for the class a poem about roads by a white man, named Frost … I could not see how any of it had anything to do with what was most important to me at the time. However, Ms. Scritfield could see.

When I pushed back to her about this assignment, she did something that all great teachers do: she listened to me and built a bridge from a football-dreaming boy to the rough road that Robert wrote about. I crossed over that “bridge” by analyzing, memorizing, and, yes, reciting that poem for the entire class. But I did not stop there. I wrote and recited my own poem … about football. But I did not stop there. I went on to become an English teacher, a high school principal, an assistant superintendent, a chief academic officer, a deputy director of education at the Bill and Melinda Gates Foundation, and now part of the faculty at Harvard.

Great teachers do many things, but one of the most important is building bridges from where their students are to where they can be. Thank you, Ms. Scritchfield! Great teaching transforms lives. I am a living witness of that. That’s why I am so passionate about making sure that great leaders set the right conditions for great teaching to happen. Go back to the 2015 NAEP Data .

Outside of education, how do you like to spend your time?

Faith, family, and golf. I am an ordained Elder in my church, and when I get the opportunity, I love to preach and sing, as a part of the Gospel tradition. I had to back off of these things a bit while working for the Foundation because I traveled so much. Going forward, I expect to engage more with these critical elements of who I am. Family is also very important to me. My wife, Kisha (a math teacher) and I love "chillin" together. We love to travel together as well as taking walks around bodies of water like Fresh Pond, Jamaica Pond, or Chestnut Hill Pond. We’re blessed with three adult sons. Irvin graduated from the College of the Holy Cross, lives in Boston, and will be working at a local school this year. Leon is an electrical engineering major at Morgan State University in Maryland, and Nicholas is a psychology major at Penn State University in Pennsylvania. He’s on the football team there, so we travel quite often during the fall to watch the team play. Golf! Three years ago, Kisha urged me to get a hobby. We were becoming empty nesters, and she claimed that all I ever did when I had down time was read education books. At the same time, when I played a sport — usually basketball — I ended up in surgery. So, I took up golf. I am officially hooked.