Making the Case for a System Overhaul

The first convening of the By All Means initiative — a partnership between six cities and the Education Redesign Lab at HGSE to eliminate the link between children’s socioeconomic status and achievement — was held on May 17.
By Lory Hough
May 18, 2016 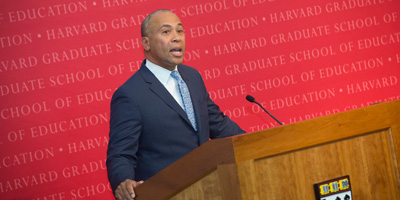 They had seen the statistics before. A depressing batch of data on how poor kids don’t perform as well, or achieve as much, as kids who grow up financially secure. Higher dropout rates. Dismal SAT scores. Lower wages. A shorter life expectancy.

Yet the crowd of educators that came to the Harvard Graduate School of Education on Tuesday for the kickoff of the Education Redesign Lab’s By All Means initiative, were furiously taking notes as Professor Paul Reville clicked through slide after slide of data. These superintendents, mayors, and school leaders from around the country were looking for ways to change the statistics and answer the question that was at the heart of the conference: How do we create an education system that works for all kids?

As Reville told the audience, we start by talking about what’s become crystal clear to anyone trying to reform education: “We’re afraid to admit that demographics still predict destiny.”

Reville, who founded the Ed Redesign Lab as a way to rethink how we educate children, said that although much education reform work has been done over the past two decades in the United States to close the “achievement gap” created from income disparities, there is still a persistent, iron-clad correlation between zip code and destiny. “The data don’t lie,” he said, showing another slide. “They tell a story — the story that there are consequences to poverty on education and life outcomes.”

One consequence, said James Ryan, dean of the Ed School, is that “Far too few students receive a high-quality education and far too few are able to reach their potential.”

Too often, we look solely at schools to “fix” this problem. But as Reville and others pointed out, schools alone can’t turn things around for all kids. “If we’re going to get all kids ready for success, it’s going to take a broader community effort,” he said.

This is exactly what the By All Means initiative is about. Over the next two years, the initiative will host a series of conferences like the one on Tuesday, at the Harvard Graduate School of Education, and work closely in the field with six cities to create individual plans to tackle a specific childhood challenge. The cities — Oakland, California; Louisville, Kentucky; Providence, Rhode Island; and Salem, Somerville, and Newton, Massachusetts — will serve as labs as they test different methods of making deep change in schools and learning for all students.

Former Massachusetts Governor Deval Patrick, the keynote speaker on Tuesday and Reville’s former boss when Reville served as secretary of education in the Commonwealth, said an initiative like By All Means is critically needed, now more than ever.

“We need to reach the talent we know resides in all communities, by all means necessary,” said Patrick. “We need to create curious, confident learners for life; learners who become undaunted by the new; learners who, with real conviction, can figure it out. We need to see and think about education as beyond the four walls of a school. But that won’t happen unless we are determined to educate the whole child.”

To do this, Reville said, “We need a new vision. We need conversations to imagine what that new vision would look like” for learning. We need to move away from an outdated, one-size-fits-all model of education. “If we build a system that would guarantee that poor children had the same opportunities that well-off students have, what would that look like?”

The Ed Redesign Lab, in addition to working closely with the six cities (to start), also plans on pushing this kind of conversation nationwide, and will focus on research, specifically what works and what doesn’t. As Reville noted, there is good work being done around the country, but unfortunately it’s done in isolation and not at scale.

As he noted several times during the conference, we shouldn’t expect teachers and principals alone to shoulder the burden of making change. They are already overwhelmed, he said, they may not have the expertise, and they don’t have the authority. During a panel discussion with the mayors of the six participating cities, Somerville Mayor Joseph Curtatone said we need to see education for what it is — “very complex.”

In some ways, said Oakland Mayor Libby Schaaf, having mayors serve as a major part of the By All Means initiative makes sense because “for better or for worse, mayors fly at an altitude that allows us to see the interconnectivity” of what impacts kids. “Just as educators alone can’t fix all of the problems in education, safety can’t be delivered only by the police. Healthcare can’t be delivered by just doctors and hospitals. No one system can do it alone.”

Louisville Mayor Greg Fischer said, “We need everyone jumping in,” noting that he recently pulled the business community into schools.

“Some knew it was the right thing to do, others got engaged when we pointed out that this is your future workforce,” he said. “We got them through the pocketbook.”

Salem Mayor Kimberly Driscoll said it’s also important to ask, what does it mean when we say we care about kids? “Everyone says, ‘We want to help,’ but how do we get a unified community vision and then get everyone to recognize that they need to play a role? You need to have that shared vision.”

Reville admitted that all of this will take a lot of hard work and “is easier said than done.” But, he added, “This is the most important work of the 21st century. This isn’t miracle work. We’re not naïve. But pushing the envelope is really important work for all of us. This is the start. We have a long way to go.” By All Means Convening keynote highlights the ways schools and communities can work together to push forward significant changes.