New faculty appointee Anthony Jack, a sociologist whose research looks at the stories of low-income, first-generation undergraduates at renowned universities, tells his own tale.
By Jill Anderson
March 3, 2016 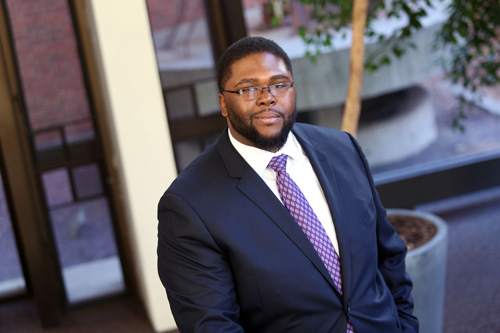 Anthony Jack’s greatest passion is the subjects of his research: the Black, Latino, and white lower income students, who arrive at renowned universities, often the first in their families to attend college.

“So many students open their hearts to me while sitting with me,” he says.

Within minutes of meeting Jack — whose pioneering research developed the concepts of the “doubly disadvantaged” and the “privileged poor” to compare the unique experiences of low-income undergraduates who come from distressed, public schools with those who attended private high schools — you learn he isn’t just another researcher but he is one of the very students he studies and writes about.

Currently a Ph.D. candidate in sociology (graduating in May 2016) at Harvard Graduate School of Arts and Sciences, Jack will be joining HGSE as an assistant professor — a role he’ll step into by July 1, 2019 following a prestigious fellowship at the Harvard Society of Fellows — and will also hold the Shutzer Assistant Professorship at the Radcliffe Institute for Advanced Study. The Harvard Society of Fellows provides the opportunity for young scholars, early in their career, to devote three years to studies in any department at the university.

The decision to continue at Harvard as faculty was an easy one. “Where I’m from few people go to college, so to go to Harvard and become a professor at Harvard is a dream,” he says. Additionally, following his first meeting with Dean James Ryan, Jack recognized important dialogues happening at the Ed School, of which he wanted to be a part.

Jack’s research and experience fit well with Ryan’s mission for the Ed School.

“I am absolutely delighted that Tony will be joining the HGSE faculty. He is a brilliant, young scholar working on some of the most important issues in higher education today,” Ryan said “Expanding access to postsecondary education for low-income and first-generation students is about more than just admissions — it also requires creating a learning environment in which those students can succeed. Tony’s research will help colleges and universities do better both in addressing persistent inequalities in opportunity and in creating truly inclusive environments.”

Part of what makes Jack’s qualitative research so tangible is he has lived it firsthand.

Calling his neighborhood of Coconut Grove in Miami “the other side of the tracks,” he witnessed violence, drugs, and disorder. Raised by a single mother who supported three children as a school security guard, Jack managed to steer clear of the many things that could have brought him down.

“My mom always prioritized education,” he says. She, along with his older brother, helped him stay on track. It helped that his mother’s job as a security guard for 30 years meant everyone knew her and that kept him out of trouble. But even more so, Jack says he benefitted from watching his mother and brother’s work ethic and their financial struggles. He explains that money was always hard to come by and he strived to be in a position of not worrying about how to pay the next bill or avoiding the bill collector’s call or putting food on the table. He also desired to minimize these struggles for his own kids, he says chuckling out loud and admitting that he doesn’t actually have kids yet.

He played football after school just for something to do. By his senior year, his strong academic performance and ability to play took him from his public high school and brought him first to Gulliver Preparatory School in Miami, and later to Amherst College.

What he never could have known at the time, or even after graduating Amherst, was that his own experience had set the path for his future research and many voiceless students, who like himself grew up poor but made it to elite colleges and universities.

“Because of the opportunity gap in the United States, there are different on-ramps for individuals into college,” Jack says. These “on-ramps” have become the focus of his research and dissertation, “Same Folks, Different Strokes Culture, Class, and the ‘New’ Diversity at Elite Colleges and Universities.”

When he began studying first-generation college-goers and cultural orientation in wealthy, elite colleges, he realized quickly that there were two groups: students who arrived at universities from private schools like himself, and those students who came from local public schools. In fact, his research revealed that even though universities strived to increase diversity among their student populations, 50 percent of first generation and low income students were arriving from elite private schools.

“It really shows how unequal society is,” he says. “We’d rather place some students in private school than combat the structural inequalities that make it bad [for them] in public school. That’s so sad to me.”

Using the terms “privileged poor,” for those students who attended private school, and “doubly disadvantaged,” for the students who attended public school, Jack examined how each group experiences the social and cultural aspects of college differently. What he discovered is that the privileged poor arrive on campus acclimated to the atmosphere of college whereas the doubly disadvantaged struggle to adapt and take advantage of offerings. For instance, doubly disadvantaged students remain unfamiliar with college services like office hours and often feel uncomfortable interacting on such a level.

Even in his own experience, he says his public high school teachers left by 2:30 p.m. but at Gulliver Prep, all teachers were available between 3:06 p.m. and 4:10 p.m. for “office hours” per part of their contract.

While the doubly disadvantaged may adjust a year or two later, Jack stresses the significance this social and cultural delay can have on a student’s future. “If you are uncomfortable engaging faculty, who is going to get the recommendation letter even if your GPA is amazing,” Jack says, highlighting the importance of social and cultural capital at college.

He has interviewed more than 100 students for the study. The longest interview clocked in at 363 minutes — that’s six hours and three minutes. In those hours, Jack’s respondents let him into their hearts, he says. He learns about things they never told anyone — mostly, he says, because no one has ever really wanted to know their stories.

“They are letting me borrow their stories and it motivates me like crazy,” he says.

But he recognizes with this work also comes great responsibility. As a young researcher, he feels like he straddles both the world of being a first-generation college graduate and a professor/researcher and how to take their stories to effectively make change. But the latter is also what drives him to continue the work. His goal is to open college and universities administrators’ eyes to the plight of many first-generation college-goers from low-income families in a way that results in positive policy changes.

“How can we get universities to understand about all the students who get to their gates,” he says, noting that often the same students are called upon to share details with college administrators over and over again. “If they didn’t do it then universities would be blind, but it is so draining for them. How can I do justice to their stories so that they don’t have to continue to tell over and over again.”