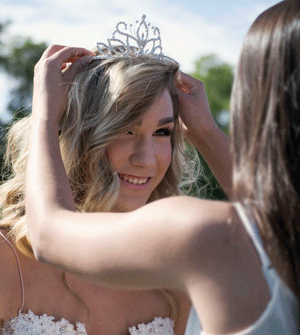 Earlier this year, history was made at a Kansas City, Missouri, high school when the first-ever transgender homecoming queen — Landon Patterson — was elected by her classmates. A show of peer acceptance like this is important for any young person, but especially one who had only recently come out as transgender.

"It was so scary for me to do all this," says Patterson. "It ended up being such a positive experience, but there were trials and tribulations as well."

One trial in particular drove Patterson's story into the national spotlight when supporters of the Westboro Baptist Church descended upon the school in protest of Landon's election. But even more good came from the bad when Patterson's classmates rallied around her and drove the hate group off.

Patterson — along with her mother and her cheerleading coach — will visit HGSE on Wednesday, November 18 as part of the new speaker series, Out Front! LGBTQ Leaders to Learn From. The event will be held at 6 p.m. in Askwith Hall. Leading up to the event, Patterson spoke with us about her story, how it felt to be both accepted by her peers and protested by strangers, and what she expects from her visit to Harvard.