Where Are They Now?

Ed.L.D. alumni are building a network in diverse roles across the sector.
By Brigham Fay
October 19, 2015

When Harvard bestowed the Doctor of Education Leadership (Ed.L.D.) on the members of Cohort 3 this past May, it unleashed 24 new leaders uniquely trained to navigate the education sector’s greatest challenges. From its inception, the Ed.L.D. has aimed to train individuals who would not only run schools and school systems, but lead transformative change through a variety of roles and organizations, from charter networks to education non­profits to state agencies.

The Ed.L.D. was conceived to achieve equity and excellence for all learners and seeks to do that in two critical ways: one, to catapult the careers of experienced educators, preparing them for system-level leadership, and two, to build a network — forging connections across the sector and across the country — that could be leveraged to increase collective impact. With three cohorts now graduated from the program and in posts spread throughout the country, the picture of its graduates’ leadership in the field is developing and the strength of that network taking shape.

HGSE believes that building the leadership pipeline is a key driver for improving outcomes in American education. Armed with the skills and knowledge they gained from HGSE, Harvard Business School, Harvard Kennedy School, and across the university — and with strategic leadership experience in the third-year residency — the first three cohorts are assuming senior-level positions that allow them to reach hundreds of thousands, and in some cases, millions of students.

Examples of current positions of Ed.L.D. alumni include:

Designed to be a launch pad for experienced educators, the Ed.L.D. is proving effective in propelling graduates to the next phase of their careers. The goal is not advancement for its own sake, but rather placing the most effective leaders in our education systems, capable of improving outcomes for students. Jason Yamashiro, Ed.L.D.’14, superintendent of the Old Adobe Union School District in Petaluma, California — and one of nearly 100 alumni and students who gathered on campus for the first annual Ed.L.D. network convening May 15–16 — reflected on his growth.

“I was already a principal in my school district and on an advanced path to leadership,” says Yamashiro. “The Ed.L.D. allowed me to step back and become a better leader, so that I can actually transform school districts rather than just lead them.”

So far, the range of organizations hiring Ed.L.D. alumni reflects the diversity HGSE strives for in assembling the cohorts themselves.

“To start with, there were students that came from a cross-section of industries, so not only people who were working in education, but in business, in law, in government,” says Vaishali Joshi, Ed.L.D.’14, curriculum writer at Expeditionary Learning in Boston. “Since graduating, we’ve gone to work in [new jobs] in those fields, so there are people who are in startups who are working across the sector with folks who are in districts and in schools. You can really see that there is representation across many aspects of the sector.”

Here is where the first three cohorts are making an impact across the field: 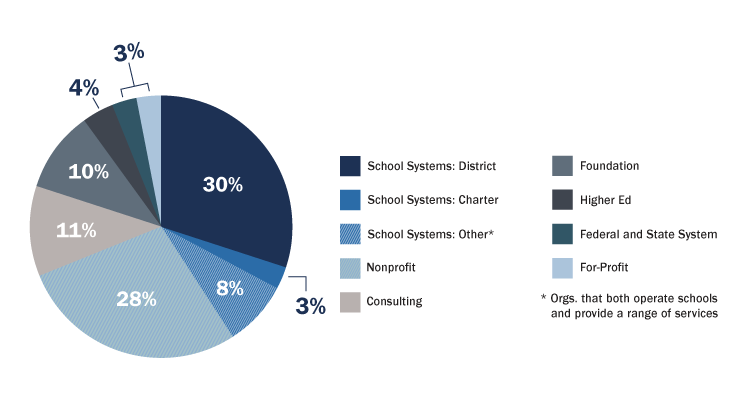 The Ed.L.D. is based on the idea that only by working together can leaders move the sector forward. With interdisciplinary coursework, an emphasis on leadership development, and deeply relevant team-based work, students prepare to practice effectively both within and across groups of stakeholders.

“When I think about what the sector needs, it’s people who are able to be boundary-spanners and to work across silos and differences. Ed.L.D. does just that,” says Amy Loyd, Ed.L.D.’13, senior director at Jobs for the Future in Boston.

As diverse and dispersed as they are, the first three cohorts to enter the field remain connected, by the network and by a common purpose — to achieve great outcomes for children.

“We all come from different places, and we even go to different places. You can’t point to something as simple as, ‘We’ve created x number of y positions,’” says Loyd. “Instead, we’re all across different domains of the sector, all working toward the same goal but from very different points of view. Together we’re stronger.”

Multiple Choice: My Brother, My Sister, My Teacher