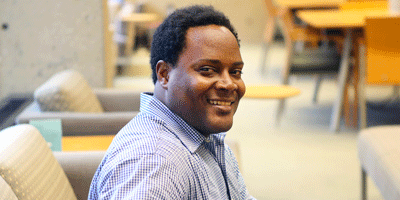 In a day and age where immigration, a path to citizenship, and access to higher education are hotly debated topics, doctoral candidate Matthew Shaw, Ed.M.’14, is conducting critical interdisciplinary research in law and higher education.

This year, Shaw’s work was recognized by the American Bar Foundation (ABF) when he was selected for the National Science Foundation-funded Law and Social Science Dissertation Fellowship. Each year, the ABF, in conjunction with the Law and Society Association, chooses three fellows from across the country to participate in a two-year in-residence program in Chicago.

The fellowship will give Shaw the opportunity to work in the context of a law research association while interacting with a variety of interdisciplinary scholars. “[The ABF] is an incubator of sorts of interdisciplinary legal scholars and that’s what I consider myself,” says Shaw. “My research on education equity involves law, education, sociology, a bit of economics, and history; so I think it fits the bill.”

Shaw’s current research examines how law affects the ability of undocumented students to attend and graduate from college. Taking his cue from the 1982 U.S. Supreme Court case, Plyler v. Doe, Shaw asks the question: Do undocumented students have the same right of access to college that their citizen and legal resident peers do?

With this research, Shaw is trying to fill a current gap in the field. “We’re talking a lot about what have laws done to structure access, but there have been very few papers that have actually looked to see,” he says. “We have a hypothesis generally in the legal community and in the sociology community; we generally believe that there have been laws in place that have caused these circumstances, but we really haven’t had a large-scale investigation of whether that’s actually true. That’s what my research is hoping to contribute to.”

Previously, Shaw’s research has contributed to the understanding of the effects of affirmative action laws — in particular, race-conscious admissions policies — on achievement for black students. In his doctoral qualifying paper, Shaw found that the effects of affirmative action bans in Southern states with a history of state-sponsored segregation are not limited to more exclusive academic institutions. Instead, eliminating affirmative action has decreased the ability of black students to attend public colleges across the board, with a pronounced effect in less selective institutions. These findings contradict the standard view of race-conscious admissions, which is that it lowers the bar for students of color and makes it easier for them to attend the more exclusive institutions.

“If affirmative action bans are causing lower rates of black-student enrollment in less selective institutions, there’s something else going on,” says Shaw.

Despite remaining questions around Shaw’s affirmative action research, for now, he has shifted his dissertation’s focus to undocumented immigrants — mainly of Mexican descent — and their right and ability to access higher education institutions. His research agenda unites these and other questions by asking: How are we using law to structure access opportunities to colleges, particularly for underserved and marginalized populations?

While Shaw is looking forward to completing his dissertation and graduating from HGSE in May 2016, for the remaining year of his fellowship there is still much work to be done. Shaw would like to broaden his research to include not only the undocumented Mexican population, but other populations as well.

“One of my goals post-dissertation is to try to figure out another way to quantitatively measure undocumented people despite their national origin,” says Shaw.

So what’s next? With all of this work, Shaw hopes to see changes in the conversation and in the laws surrounding affirmative action and undocumented students seeking higher education.

“Did law actually cause this situation?” he asks. “And if so, can law remedy it?”