When Students Become Entrepreneurs — For Education 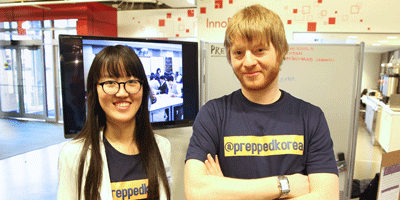 The challenge was an example of an exercise that Ochoa and Zhu plan on using with high school students as part of Prepped, a nonprofit they created this past semester in A132 with teammates Robert Lewis and Ed Magema, all students at the Harvard Graduate School of Education (HGSE). Taught by Professor Fernando Reimers, the educational entrepreneurship class allows students to identify a challenge in education and then design an innovative way to address it. Last week at the i-lab, the 24 student-created innovations were presented and then judged.

Classes like these are critical, says Reimers. More than ever, students interested in making real change in education need to think outside the box, he says.

“Educational improvement is typically understood as helping educational institutions become more effective at achieving their goals,” he says, “but the social and economic context is changing more rapidly than education institutions.”

Throughout the semester, as students fleshed out their ideas, the innovation became more than just paper and pencil exercises. Students wrote actual business plans and developed concrete steps for turning their ideas into functioning nonprofits.

Master’s student Moshe Ohayon came to the class with a challenge he was facing as the director of an afterschool program, and as a tutor. In his work, he saw plenty of kids who were struggling academically, but he also saw high-performing high school students who wanted to help others. Was there a way to bring the two together that would help both groups? He thought there was, and created Educational Justice Activists, a nonprofit that enlists high-achieving juniors and seniors and allows them to pair with struggling, younger students for one-on-one tutoring and mentoring, for a span of two years.

Other projects created during the class include an organization that will provide free public libraries in India; an online platform to help students make more informed decisions when applying to college; an app that gives students fun, game-based content that shows what real scientists are like; a cellphone-hosted service for rural teachers in the Philippines that provides direct training and tips; and a nonprofit that will train and employ parent liaisons to develop stronger bonds between families and middle schools in an effort to improve dropout rates.

Just as the range of projects was diverse, so too were the students who created them, says Reimers, adding to the “One Harvard” ethos.

“This course attracts students from several Harvard schools: HGSE, Harvard College, the Kennedy School of Government, the Chan School of Public Health, the Law School, and the Business School,” he says, as well as students from the Fletcher and Sloan schools, at Tufts and MIT. “I love the opportunity to see these different groups of students come together in search of innovative ways to help learners expand their potential so we can address important global challenges.”

Back at Prepped, the team was excited to talk about their project, which engages high school students in rigorous but experimental projects as a way to build 21st-century skills — like the team work needed for the rope exercise. They also want to help students break out of the rut of studying just to prepare for tests. This summer, Prepped will pilot the program in Seoul, Korea, where team member Lewis has been living and running a test-prep company. The hope is to expand to Mexico, China, and Kenya, the home countries of the other Prepped members.

Projects like these, says Reimers, would make even Karl Marx proud.

“In one of his Theses on Feuerbach, Karl Marx argued that philosophers had been mostly preoccupied with interpreting the world, but that the point was to change it,” Reimers says. “While it would be a stretch to argue that Karl Marx laid the epistemological foundations of social entrepreneurship, or that most social entrepreneurs are Marxists, I know that many students have the desire to improve the world, not just to understand it.  Educational Institutes can honor this desire by creating learning opportunities that allow students the capacity to develop their skills as agents of change, rather than spectators.”