HGSE Presentation of Diplomas and Certificates 2015

With a fierce winter in their rearview mirrors, HGSE graduates a resilient 701 master’s and doctoral recipients.
By Mary Tamer
May 28, 2015 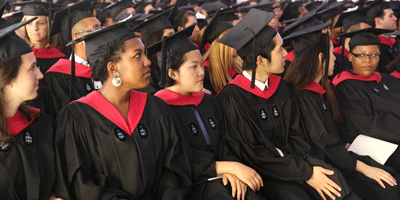 On a glorious and sunny May afternoon, with temperatures soaring to the high 70s, Dean James Ryan felt compelled to remind the 701 soon-to-be graduates about the unexpected challenges faced by those who had withstood an historic winter in New England.

“If you survived the snowpocalypse this year,” he joked, “you can survive anything.”

Ryan also acknowledged two faculty members within his remarks: Professor Emerita Patricia Albjerg Graham, who was conferred with a doctor of laws degree at Harvard’s morning Commencement exercises; and recently retired Professor Kurt Fisher, whom Ryan called “a pillar of this community and a true giant in the field of human development. He retired this year, after having dedicated his life’s work to this place, and he leaves the school much richer because of his time here.”

With a declared theme on the “sin of omission” for the second commencement address of his tenure, Ryan explained that his remarks were “not from a religious perspective but … as a metaphor for ethical behavior and an approach to life. This will be a secular sermon, not a religious one.

“By way of background, the basic idea behind the sin of omission, whether as featured in religious traditions or in its secular, metaphorical form, is that, just as it is wrong to do intentional harm, it is also sometimes wrong to do nothing — that is, it is wrong to fail to act or speak,” said Ryan.

Weaving together moments of humor with poignancy by way of personal anecdotes —as well as reflections on newsworthy events of the past 12 months — Ryan told graduates to take pride in their work and accomplishments, while asking themselves what more might they do to help others. “It’s precisely because you are so talented that you should never be completely satisfied until you have satisfied yourself that you have done all you could,” he said.

Ryan also impressed the importance of speaking up when you have something to say, “even when no one would expect you to speak or blame you for remaining quiet.” Touching upon the tragic police shootings of unarmed African Americans in the past year across several U.S. cities, Ryan noted, “As a society, we tend to focus so much attention on bad acts that we lose sight of what led to those acts in the first place. Possible sins of commission blind us to the preceding sins of omission.

“…. We focused a lot of attention on the shootings or killings and the reaction by those who protested, sometimes violently, afterward,” said Ryan. “But much less attention was paid to all of the things we didn’t do up to that point that might have averted these tragedies. And one of the biggest things we haven’t done in this country is educate our kids in a way that enables them as adults to see similarities, rather than differences, across lines of race and class…. More generally, I would say that our single biggest national sin of omission is our continued failure to provide our most vulnerable children, often poor and students of color, truly equal educational opportunities. The central problem of education is not so much what we are doing, but what we have failed to do.”

Noting that it is the desire to change existing circumstances that often leads students to HGSE, Ryan closed with advice to “lend a hand, right wrongs, speak up, and as you leave Appian Way today, see what needs doing and do it without being told.”

The HGSE Intellectual Contribution Award recognizes 13 students (one from each Ed.M. program) whose dedication to scholarship enhanced the academic life of the community and positively impacted their fellow students.