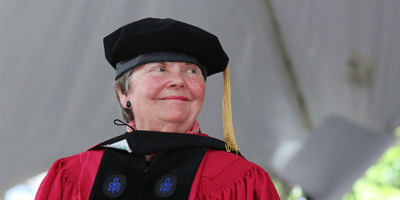 A version of this article originally appeared in the Harvard Gazette.

Professor Patricia Albjerg Graham was named honorary doctor of laws at the Harvard University Commencement Exercises on May 28. She was one of 10 people to receive honorary degrees at the ceremony.

Graham, Harvard’s Charles Warren Research Professor of the History of American Education Emerita, powered through a 46-year career of teaching, administration, and scholarship largely inspired by the idea of bringing the best education possible, she said once, “to people who have been excluded from it” — underprivileged minorities, women, and poor whites. (Graham began her teaching career in 1955 at Deep Creek High School, a segregated white school in Virginia with a 75 percent dropout rate.) She herself had dropped out of high school at age 16, impatient with the public schools in her native West Lafayette, Ind. But Graham earned a bachelor’s degree in English and history from her hometown university, Purdue, and in 1969 a Ph.D. in the history of education from Columbia University.

Graham was director of Barnard College’s Education Program from 1965 to 1974, where she learned about underserved students in New York City schools. During her New York years, Graham took time off to help Princeton University adapt to its new co-ed student body, in step with other Ivy League schools.

In 1974, she joined the faculty at the Harvard Graduate School of Education and became vice president of Radcliffe College and also dean of what became the Radcliffe Institute for Advanced Study; took 1977-79 off to direct the National Institute of Education; authored seven books along the way; and in 1982 made history: Graham became the dean of the Harvard Graduate School of Education (1982-91), the first woman at the University to be named dean of a whole faculty.

Among the other honorees were former Massachusetts governor Deval Patrick, acclaimed opera singer Renee Fleming, and founder and director of the Equal Justice Initiative Bryan Stevenson.

To read more about this year's honorary degrees, visit news.harvard.edu/gazette/story/2015/05/ten-to-receive-honorary-degrees. The noted psychologist whose work in child development influenced generations retired at the end of the academic year.

A Tribute to Eileen McGowan

A beloved mentor and teacher, McGowan retired at the end of the academic year.