The recent Harvard Seminar for New Presidents attracted 23 female presidents — almost half of the total 50 attendees.
By Jill Anderson AND Matt Weber
August 18, 2014

The days of the college presidency as a job for men is quickly becoming outdated as more and more women step into the role. The recent Harvard Seminar for New Presidents was a perfect reflection of this, attracting 23 female presidents — almost half of the total 50 attendees.

Professor Judith McLaughlin, who leads the institute, sees this significant jump in female participants — more than double the two previous years — as particularly remarkable, especially considering many of the women are the first female presidents ever at their college or university.

“There has been an increasing openness to woman candidates,” McLaughlin says. “Thirty years ago when I began to study presidential searches, search committee chairs often wondered aloud about whether their institution was ready for a female president. Happily, that is no longer a question.”

“Thirty years ago when I began to study presidential searches, search committee chairs often wondered aloud about whether their institution was ready for a female president. Happily, that is no longer a question.”

McLaughlin speculates that higher education’s pipeline to the presidency is also expanding as more women take on roles as deans and faculty, and as more institutions consider leaders from outside organizations.

For this year’s cohort, the number of female participants came as a welcome surprise at the seminar, which for the past 25 years has helped new presidents tackle critical issues facing their first years on the job.

“The presidency is a lonely role,” says Laurie Leshin, president of Worcester Polytechnic Institute, in Worcester, Massachusetts. “It’s lonely at the top and to know and have colleagues you can count on and have so many of them be women is a bonus.”

The interactive institute, which focuses on topics of leadership, fundraising, planning, strategizing, and the life of the presidency, is also designed to help presidents build relationships with colleagues.

“It’s a huge gift for the new presidents to come into a room surrounded by people in the same job,” McLaughlin says. She agrees that the presidency can be isolating, especially because there is no one else at the college or university with the same perspective and responsibility. The institute provides a chance for these new presidents to build relationships that they can continue when they leave Harvard. 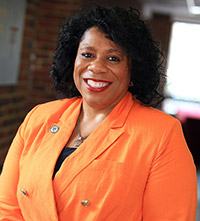 Alicia Harvey Smith, the new president of River Valley Community College, in Claremont, New Hampshire, who had heard about the program from others, knew she wanted to be a part of the experience. She says it was a great opportunity to reflect, think about issues in higher education, and also be a model for other women.

Although the female presidents enjoyed opportunities to talk to their male colleagues about the work at the institute, they cherished having fellow women to relate with. “There is something about having my female colleagues to talk about issues that only pertain to us, whether [it be] attire or how we are scrutinized a little more fully in terms of what we wear, what we say, and how we carry ourselves,” says Elizabeth Davis, president of Furman University in Greenville, South Carolina. “So why not have some colleagues to bounce ideas off about those issues?”

As for whether there are truly differences between male or female presidents, McLaughlin is uncertain the extent to which gender plays a role. “The range in presidential style has more to do with individual differences of a person,” she says.

Despite the growing number of women in the presidency, many of the new women presidents feel very visible on their campuses. “Everyone has noticed that I’m the first woman and first African American woman,” says Joanne Berger-Sweeney, the new president of Trinity College in Hartford, Connecticut. Of course, it wasn’t until 1970 that Trinity College became co-ed, allowing women to attend. She points out that the college’s evolution is now being reflected in its leadership.

“Half the time I’m sitting in the room, I pinch myself because I can’t believe I’m a president,” Berger-Sweeney admits.

Many of these female presidents see themselves as paving the way for more women to take on these positions in the future.