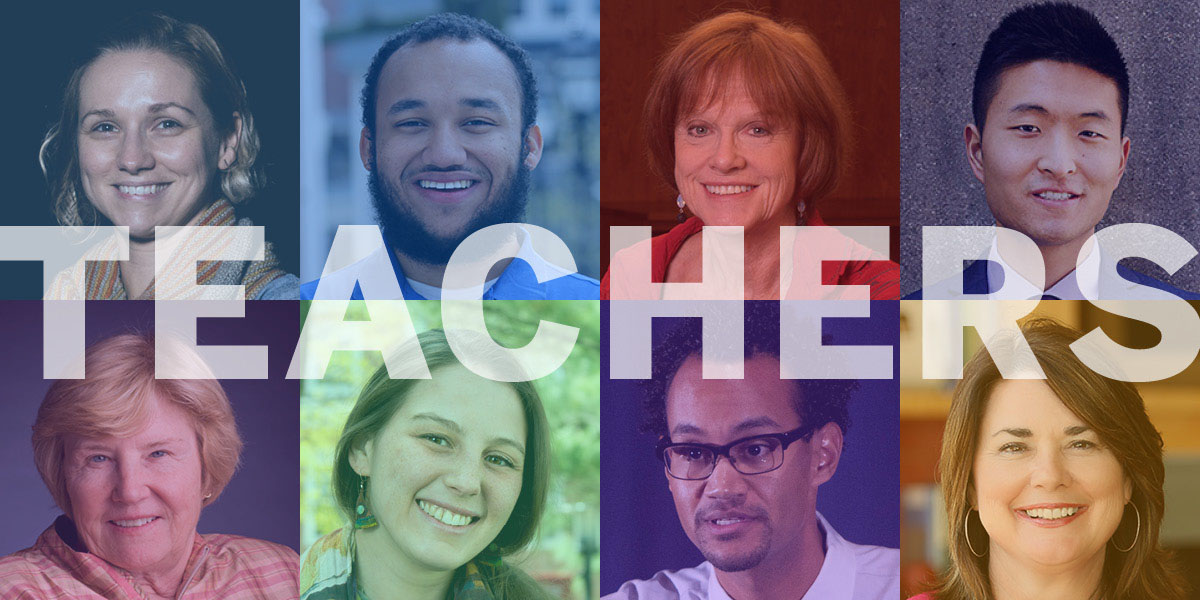 From the introduction of the M.A.T. in 1936 to the launch of the Harvard Teacher Fellows in 2015, HGSE has been committed to developing innovative, equity-minded, and effective teachers. The educators mentioned here are especially impactful — but they represent only a small sampling of the many classroom teachers who have learned to change the world at HGSE. We’re proud of them all.

We celebrate the classroom impact of our HGSE teachers — doing the work for equity, opportunity, and rich learning every day.

Prior to joining the HGSE faculty, Katherine “Kitty” Boles spent more than 25 years as a classroom teacher. A member of the Boston Women’s Teachers’ Group, Boles and her fellow classroom-teacher members received a grant from the National Institute of Education and conducted research on the teaching profession that was ultimately published in The Handbook of Teaching and Policy. At HGSE, Boles continued to support the growth of teachers as faculty director of the Learning and Teaching master’s program. Author of numerous books on teaching and teacher leadership, including Who’s Teaching Your Children? and The Power of Teacher Teams, Boles continues to advocate for policy changes to restructure the profession.

As a first-generation college student at Harvard, Reuben Howard was well aware that education has the power to motivate people and change their worldviews. He pursued teaching as a career through HGSE’s Harvard Teacher Fellows Program, becoming a middle school English teacher. Howard actively strives to incorporate issues of race, gender, class, and sexuality into his lesson plans and classroom activities, chairing a team of eighth-grade teachers that leads organization-wide professional development on those topics. In 2019, he was recognized with the Early Career Educator of Color Leadership Award from the National Council of Teachers of English (NCTE).

Middle and high school teacher Woojin Kim came to the Ed School from Houston, Texas, where he had taught for three years. As an educator, he recognizes the power of popular media to contribute to students’ sense of belonging, with diverse representation within a cultural group being particularly important to students seeking to recognize themselves in pop culture. He has created sample lesson plans for teachers who want to bring contemporary representations of Asian American identities in literature and popular culture into the classroom. In the first two lessons he piloted while at HGSE, he developed one curriculum centered on the film and Kevin Kwan book Crazy Rich Asians, and another that used the lyrics of the Filipino-American rapper NAK as a lens on second-generation Asian American identity. He now chairs and teaches in the classics department at Flint Hill School in Oakton, Virginia.

High school teacher Jenny Kostka had been teaching physics and astronomy for more than a decade, so when she saw an opportunity to contribute her expertise as a teacher with an educational technology background to a NASA-PBS partnership, she pounced on it. Kostka was selected from a pool of 650 applicants to be part of an adviser team of K-12 teachers for a science curriculum development project called Bringing the Universe to America’s Classrooms. The project gave Kostka and the advising team an opportunity to develop new curriculum material specifically intended for science teachers, and it paved the way to Kostka’s current role as a curriculum writer.

For many of the students in Jessica Lander’s classes at Lowell High School in Massachusetts, the United States is a new home. They come from around of the world — often from countries experiencing traumatic upheaval, such as Afghanistan, the Democratic Republic of the Congo, and Syria. Lander welcomes them all, empowering them to embrace their identities and bring their voices into high-impact conversations. During the 2018-19 school year, in her Seminar in American Diversity, a project designed to encourage her students to consider their unique identities as Americans evolved to extend far beyond the classroom. The We Are America project — emboldening students to craft deeply personal essays about immigration, mental health, and cultural identity — now spans 25 states and more than 1,500 students.

After a 25-year teaching career in middle and high school mathematics, Katherine “Kay” Merseth shifted her focus to teaching the teachers. She became an HGSE faculty member, directing the Teacher Education Program for years, and being instrumental in the launching of the Harvard Teacher Fellows Program and the education secondary at Harvard College. She has made a significant impact on teacher education and published articles on a range of pedagogical topics, including the case method of instruction for mathematics. Merseth has received a Harvard Initiative on Teaching and Learning Award and the Harvard Phi Beta Kappa Prize for excellence in teaching, and in 2007 she became a member of the Massachusetts Mathematics Educator Hall of Fame.

At Palo Duro High School, a Title 1 school in Amarillo, Texas, English teacher Shanna Peeples worked primarily with low-income students, many of whom were refugees from East Africa. She taught in the school’s evening program and worked hard to gain students’ trust and make them feel valued. She found the work deeply challenging, but also deeply meaningful; teaching drew on her innate empathy and her talent at forging authentic connections. She made a difference — so much so that she was named National Teacher of the Year in 2015. She later shared some of what made her classroom so special, in her 2018 book Think Like Socrates: Invite Wonder and Empathy Into the Classroom. Now at HGSE, pursuing a doctorate in education leadership, Peeples and several other doctoral students launched the podcast Pedagogy of the Obsessed, which constructively examines the American education system. She currently serves as an equity and access fellow for the Council of Chief State School Officers.

As an undergraduate, Manuel Rustin noticed the many racial disparities in his classrooms and on campus, but rather than accepting it, he set out to change it. Rustin has spent all of his post-HGSE years teaching history, government, economics, and hip-hop studies in Title I public high schools, including John Muir High School in Pasadena, California, where he has also led a skills-based mentoring program for freshmen and sophomore boys previously identified as being at risk of not graduating high school. In 2012, he was one of just 39 recipients of the prestigious Milken Educator Award and was recognized by the Pasadena NAACP with the Ruby McKnight Educator Award. He recently completed his doctorate in education leadership at UCLA and hosts an education podcast, All of the Above, with fellow HGSE alumnus Jeffrey Garrett, Ed.M.'04. – Timothy Butterfield

Learn about the Secondary Field in Educational Studies at Harvard, a collaboration between the Harvard Graduate School of Education and Harvard's Faculty of Arts and Sciences, launched in 2018.