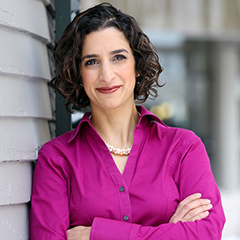 Natasha Kumar Warikoo is associate professor of education at Harvard University. She is an expert on racial and ethnic inequality in education. Her most recent book, The Diversity Bargain: And Other Dilemmas of Race, Admissions, and Meritocracy at Elite Universities (University of Chicago Press, 2016), illuminates how undergraduates attending Ivy League universities and Oxford University conceptualize race and meritocracy. The book emphasizes the contradictions, moral conundrums, and tensions on campus related to affirmative action and diversity, and how these vary across racial and national lines. The book won multiple awards from the American Sociological Association, the Society for the Study of Social Problems, and American Educational Studies Association. Warikoo's first book, Balancing Acts: Youth Culture in the Global City (University of California Press, 2011), analyzes youth culture among children of immigrants attending diverse, low-performing high schools in New York City and London. Balancing Acts won the Best Book Award from the American Sociological Association's International Migration Section. Both of these projects involve extensive ethnographic research in the United States and Britain. In 2017-2018 Warikoo was a Guggenheim Fellow, studying racial change in suburban America. Her latest book, Rules of the Game: Asian Americans, Whites, and the Quest for Excellence in Suburban America, will be published by University of Chicago Press.

At Harvard, Warikoo teaches courses on racial inequality and the role of culture in K-12 and higher education. Prior to her academic career she was a teacher in New York City's public schools for four years, and also spent time working at the U.S. Department of Education and as a fellow with the Teachers Network Leadership Institute. Warikoo completed her Ph.D. in sociology from Harvard University, and B.Sc and B.A. in mathematics and philosophy at Brown University.

Critics Choice Book Award for The Diversity Bargain: And Other Dilemmas of Race, Admissions, and Meritocracy at Elite UniversitiesAmerican Educational Studies Association,(2018)

How does the settlement of the nations most successful immigrant groups shape the nature of racial boundaries, beliefs about success and achievement, and youth cultures? This project studies the impact of an increased Asian American population alongside increased competition at high schools in wealthy suburban communities. The findings will contribute to our understanding of assimilation and racial change. The study employs 200 in-depth interviews with white, Chinese American, and Indian American students and parents in two wealthy suburban communitiesone with a large, growing Asian American populationand ethnographic observations and staff interviews at the local high school in both.

Warikoo, N. (under contract, University of Chicago Press). The Rules of the Game: Asian Americans, Whites, and the Quest for Excellence in Suburban America.,(2020)

"What Meritocracy Means to its Winners: Admissions, Race, and Inequality at Elite Universities in the United States and Britain." (forthcoming). Social Sciences.,(2019)

Warikoo, N. and I. Bloemraad. "Opportunities to Succeed" or "Money and more Rights": Social Location and Young Peoples Views on American Identity. Journal of Ethnic and Migration Studies 44(5), 736-753.,(2018)

Warikoo, N. The Diversity Bargain: And Other Dilemmas of Race, Admissions, and Meritocracy at Elite Universities. Chicago: University of Chicago Press.,(2016)

Warikoo, N. and de Novais, J. "Colorblindness and Diversity: Race Frames and Their Consequences for White Undergraduates at Elite US Universities." Ethnic and Racial Studies, 38(6).,(2015)

Warikoo, N. and Deckman, S. "Beyond the Numbers: Institutional Influences on Experiences with Diversity on Elite College Campuses." Sociological Forum, 29(4).,(2014)

Warikoo, N. and P. Carter. "Cultural Explanations for Racial and Ethnic Stratification in Academic Achievement: A Call for a New and Improved Theory". Review of Educational Research.,(2009)

Warikoo, N. "Racial Authenticity among Second Generation Youth in Multiethnic New York and London." Poetics: Journal of Empirical Research on Culture, the Media, and the Arts 35(6): 388-408.,(2007)

Warikoo, N. "The Continuing Significance of Race and Ethnicity in The Melting Pot," in Americas Americans: The Populations of the United States, ed. P. Davies and I.Morgan. London: ISA Press.,(2007)